Royal Blood have definitely had an interesting summer. Number one album, UK tour sell out in two minutes, nominated for a Mercury Prize, front covers, general fame and glory, that kind of stuff. So Northern Transmissions was very pleased to be able to talk to the extremely affable Ben Thatcher about the crazy ride he’s on and what’s really important about playing music. Alice Severin coaxed him away from the beautiful wild creatures he was communing with and got him to share a little taste of what it’s like to be on the road in America when your band is exploding everywhere.

Northern Transmissions – Hi, how are you doing?

Ben Thatcher – I’m very well, having a day off today.

NT – You’re touring the US now. Where were you last night?

BT – (laughs) I don’t even know where I was. Uh, St. Louis last night, tomorrow I’m in Houston.

BT – I’m at the zoo in Arkansas. Currently having a stare off with a jaguar.

NT – That’s not good – somebody’s got to look away first, or something.

NT – Just stay on that side. Do you like zoos?

BT – I love them. I mean, I like obviously like animals being free and running around in the wild, but I also wouldn’t like being with them when they’re doing that. Some of these zoos are incredible now, they’ve got loads of places, there’s lots of space for them to play in so it’s…good.

NT – They seem a lot more free than they used to be, no more animals in little cages.

BT -That’s it. It’s getting there.

NT -How is the tour going? What’s it like being in the States again? You were last here in May.

BT -Yeah, I love it here. It’s one of my favorite continents to tour in so we’re having a good time actually, doing the full run-around.

NT -You’re covering a lot of ground, going across the country and up to Canada, New York, LA, so it’s a busy schedule.

BT – Yeah, it is busy. But that’s what we love doing, playing to different people in different places – it’s a privilege to be able to do that.

NT – You look great live. And all these amazing things have happened. Does it feel a little bit unreal?

BT – Yeah, that’s it – it’s all a bit crazy, the whole process. It’s all been so full on, one thing after another, that’s it’s all been a little bit crazy, what’s happened this year. I mean, we don’t expect anything, we have no expectation of being on the front cover of a magazine, or a number one album. We just write music and like having fun doing that. It’s all we do naturally together. So anything else is a complete bonus for us.

NT – It’s brilliant. But still, if you win the Mercury Prize, who would your dream presenter be, if anyone in the universe, in the world, could present the award?

NT – You and Mike Kerr have known each other since you were 16.

NT – When you write the songs together, do you think that helps – because you know each other that well?

BT – Definitely. There’s a chemistry in our writing, and I think that comes from our friendship and knowing each other for so long.

NT – I saw the preview pic for the new video, which looks like you’re in a cave, by the ocean, or something?

BT – Yeah. We’re actually in New Jersey, in a quarry. It’s actually where the mining bit in Zoolander was filmed.

BT – Yeah! (laughs) There’s going to be a lot of Blue Steel, I assure you.

NT – Do you know when it’s going to be released, and can you say what song it is going to be for yet? I’ve heard rumors, but…

BT – I cannot tell you quite yet, but it is not too far away. You’ll be knowing it very soon.

NT – It looks very cool – the picture is great.

NT – So you said something a while back about X-Factor. Do you think that the success of the album shows that it’s the end of the road for the manufactured music of the Simon Cowell variety?

BT – No, I think there’s a place for all of that. I mean, a place where I want to be far from because I think it’s a very quick way of becoming something that you’re not sure about becoming. I play music because I love playing music. I don’t do it because I want a number one album, I don’t do it because people tell me to, or want me to produce an album, you know. It’s all about what I want to give, I guess, and what Mike and I feel it’s right to do. So I think there’s always a place for competitions like X-Factor and all, but I don’t want to be within a mile’s distance of that.

BT -Yeah, it is. And what I believe is, I don’t think music is any kind of competition. I don’t like comparing bands to one another, and having a winner, because I don’t think music is about that at all. I think once you’re putting that in place, you’ve kind of lost what I feel music is meant to be. And that’s something that you enjoy. And I think things like competitions, and X-Factor, things like that…just pressure and media and a lot of disappointment. And a lot of thought goes into it as well. I think there’s some brilliant people, brilliant musicians out there, and even if it’s not to someone’s taste, you know, you don’t have to vote not for it to win, or you know, or vote for something to win. Just let them do what they like to do, and if you like it, then buy it, and listen to it and enjoy it. And if you don’t, then don’t listen to it. It’s very simple, I think.

NT – I agree with you. I think a lot of people are seeing any artistic output as a sort of zero-sum game where winner takes all, and it’s got so little to do with actual art or creativity.

NT – Did you take music lessons when you were a kid? Piano, that sort of thing.

BT – Not at all. My mum and dad bought me a drum kit, and I just loved to play it. I loved listening to music and playing along. And that’s all I did.

BT – I don’t believe in guilty pleasures. So, it’s all pleasures for me.

NT – I have to ask, I saw that apparently you like tandoori prawns or both of you do?

BT – (laughs) Yeah, that was something – being on the road, there were these little…I don’t know how this story has come out so much but (laughs) they asked us what we were eating on tour and that’s what we were eating at that time, so there’s no big story behind it really. In England, it’s in Marks and Spencer’s, which is your roadside services, that’s where you can get them from, so that’s why we were eating them.

NT – Are you looking forward to the New York and LA shows?

BT – Yeah, I mean, we’re loving right now, we’re loving touring. We love being in America and wherever we are – we love playing gigs in different places, so there’s not really one show or one place that we’re looking forward to really.

NT – Any thoughts about the next album?

NT – And – five albums that still inspire you.

Queens of the Stone Age Songs for the Deaf

Royal Blood are now on tour. 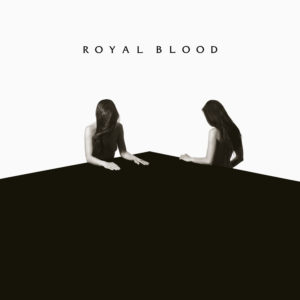