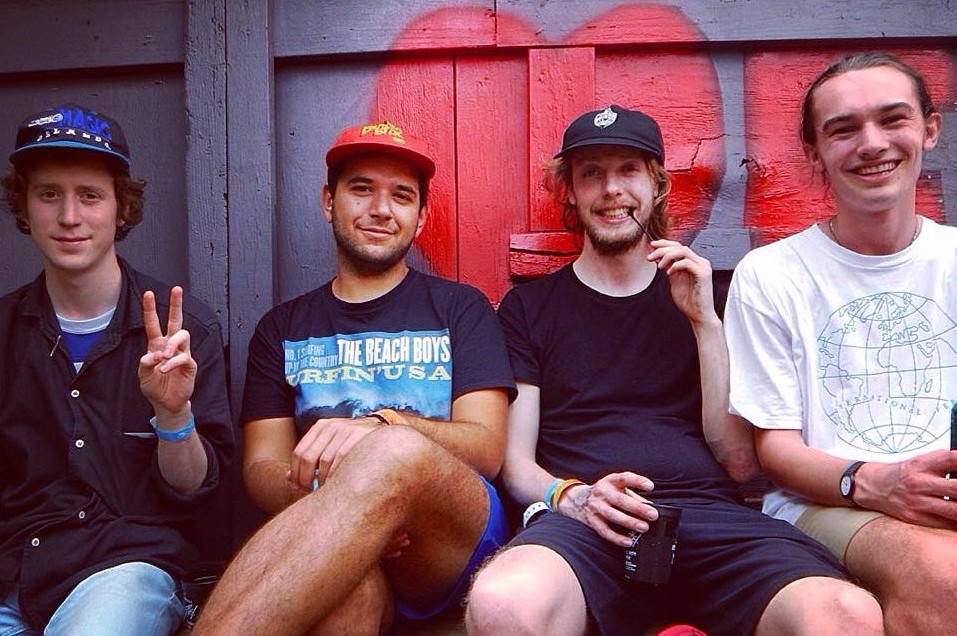 Spring King is a high energy garage rock band based out of Manchester, UK. Originally started as the brainchild of production virtuoso Tarek Musa, the project has since grown into a full group that now includes Peter Darlington, James Green, and Andy Morton. Jeffrey Powell sat down with Tarek and James to discuss their approach to songwriting and their reaction to the wave of momentum they’ve experienced going into this year’s SXSW.

NORTHERN TRANSMISSIONS: I’ve read that the band began with you, Tarek. What was your approach to songwriting during that period?

TAREK MUSA: I try to write a song a day. That’s how it started… just a way to try and learn how to write songs. And, if it’s not good at the end of the day, I’d just get rid of it. Just that pressure alone makes you want to write.

NT: Do you try and capture ideas on the go?

TM: There’s not a massive thought process or preparation that goes into writing the songs; it’s just capturing it as it comes. I try and keep it as fast as possible with the whole process because while I love to record, I love playing live even more. That’s my favorite part. I’ll sit down with a guitar, and if something comes, I’ll start my day with it and then I work as I go. I record and mix it all in one day.

It’s changed now though. For the new EP that we’ve just put out, everyone plays their own parts. We don’t really have a lot of time on our hands because we all have day jobs. So, to even find a day per week to come and write together can be difficult. Once I send the songs over, the guys just do whatever they want and create their own parts

NT: How did the group come together?

JAMES GREEN: Tarek, Pete and Andy actually all went to high school together. I worked at a venue and responded to a Facebook post they’d put out through mutual friends. It’d said “who wants to play in a surf band?” I thought – I’d like to be in a surf band! I’d never played bass, though.

NT: So you responded to the ad and became the bass player, without having ever played bass?

JG: Ya, I got really lucky man. I threw up a comment and chatted with them about bands that we liked, and shared ambitions. The rehearsals went really well. A couple weeks later, I bought a bass and then we just went on from there.

NT: How long have you been with the band?

NT: What kind of commitment did you have to make to learn the instrument?

TM: James is a bit of a virtuosso. He plays piano, guitar, drums. He studied drums at university so he’s actually the most musically talented of the band. He knows all his theory. Sometimes what happens is when we’ve got some songs together, and we go to rehearsal, James teaches everyone the parts. Because sometimes I’ve forgotten what I’ve even played. (laughs) And Pete and Andy don’t necessarily interpret the music as much as James can. We work in weird ways. (laughs)

The band has come a long way. At first it was a solo-y type thing with just me, but then a lot of people were really enjoying it. And, now it’s the band – we’re all equal.

NT: Was the new EP a collaborative effort then?

TM: We had four songs for the EP, and then we needed one or two more so I literally spent that night and just got to work on it. The problem can be though that I work at stupid hours of the night, and we all live away from each other – for instance, Pete lives in London, which is 200 miles away. Certain times I just have to write the song or that’s just the way it is at the moment. But as soon as there’s space and a budget, or we can get a couple of weeks off to just write music together for the album, it’ll be different. That’s the plan anyways.

JG: Sometimes it isn’t necessary for the rest of the band to be involved. Tarek has the ability to just write the tune, get it all down, and get the parts recorded.We’re quite lucky that we get to come and play the shows. We all just vibe off the live shows.

TM: It’s as if the music is just the means to get us to play live. Like I’m just rushing it and the guys are saying “ya, ya, play whatever parts you need to. Just play my part.” (laughs) Anything, let’s just get on the road, y’know? It doesn’t mean we disregard it. We only release stuff that we love, but luckily at this point in time we haven’t had writer’s block yet. That will come, and that day will destroy us I’m sure! (laughs) But for now, let’s just write a song a day, chuck it out, and then move on, y’know?

NT: So you’re living in the optimistic stage of a band’s life? (laughs)

TM: We’re all pretty cynical. Y’know like the music industry does weird things to people. There’s a lot of money floating about in perhaps the wrong places sometimes. And sometimes the right places. It’s weird how that can affect someone. We know people who haven’t really developed yet. Maybe they’ve done a couple of shows, and then they’re just thrown out there. And it’s great, and you have an awesome time, but then if you haven’t developed inside first, it’s not a genuine thing…

JG: It’s quite a lot of pressure.

TM: How can anyone do something super from the heart when there’s so much pressure y’know? But I’m probably speaking more to major label examples with that kind of thing.

NT: Does that make you happy at the way your band has grown? Like in an organic sense?

TM: We’ve done it all with no money. To think a lot of bands will have a lot of money put into them, they might not make it back. And they can’t make a living until they’ve cleared that investment. We’ve been very lucky to have gotten grants from the BBC and PRS, which is a royalty foundation in the UK. Everything we do at the moment, we do at a deficit, but at least we don’t owe anyone any money yet.

We’d gotten some love – Transgressive put out our first single and our last EP. Handsome Dad records are putting out this one.We’ve got a great group of people around us who have a lot of faith in us. Like Steve Lamacq, Zane Lowe, and the BBC. They’ve been playing our stuff since the beginning. It’s support like that, that we need and hasn’t necessarily come from just having lots of cash and paying people or anything. We are a very DIY band at heart.

NT: What’s your five fav records at the moment?

Courtney Barnett – Sometimes I Sit and Think, and Sometimes I Just Sit
J Dilla – Donuts
Parkay Quarts – Tally All the Things That You Broke
Hedge Maze – Dysania
Drake – Nothing is the Same