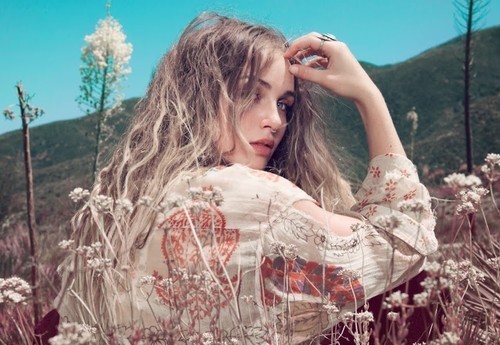 Zella Day is an emerging pop star and definitely someone whose career will be worth following. Her self-titled EP arrived last year, and she’s getting ready to release her debut full-length album in June 2015. Her songs are packed with catchy choruses and hooks, but she spends as much time focusing on her song-writing craft. All in all, Zella Day has all the tools to be a massive pop force for a long time to come. We reached Zella in her backyard in sunny Los Angeles. You can catch February 13th in Portland, OR with Milo Green.

Northern Transmissions: Your music has been described as “bright and well arranged” indie pop and you’ve been compared to everyone from Stevie Nicks to Lana Del Ray. How would you describe your music to people who haven’t heard you yet?

Zella Day: I would describe my music to people who haven’t heard it yet probably as dark desert gypsy pop.

NT: Haha you might be the only person in that genre ever.

ZD: No, I don’t think that I’m necessarily pioneering, I think that there are a lot of artists right now that are kind of doing darker pop like I am; but I feel what separates me is that I started as a singer-songwriter playing guitar and writing songs. On my record coming out in June, there are songs that are very stripped down and I think that’s kind of where my roots come from. I’m not pure dark pop but mixed with country and singer-songwriter.

NT: I watched a stripped down performance of Sweet Ophelia and, compared to the music video, it’s really cool how you’re able to succeed at both sounds. Which do you prefer?

ZD: I think it’s different. I’ve been playing live with a band now for a year and that took some getting used to, but I love it now. At first I was a little intimidated because the sound was so much grander than just playing in a room by myself. I played on coffee shop stages for a long time, so I’m always going to love doing that, but I think there are a time and a place for both, so I wouldn’t say that I have a favourite.

NT: Is your real name Zella?

ZD: Yes it is! It’s a really old one actually, my parents found the name when they got married in Jerome, Arizona, a small coal mining town. There’s actually going to be a track on the new album called Jerome. When they were checking out the place, they found old year books from 1842, and they found the name of the head coal miner’s wife was Zella. It was a super popular name way back in the day, and then it just faded out.

NT: Who would you list as your biggest musical influences?

ZD: I fluctuate between influences, but I’m listening to a lot of The Zombies right now. I also have the new D’Angelo record playing at my house, so my inspirations are always changing. I try not to emulate any artist because I want to enjoy music as just a true form of expression; your perspective has to come from yourself.

NT: I want to ask you about two songs. On “1965”, you sing about not belonging in modern times. What era and location would you have preferred to live in?

ZD: Probably the 1960s…I would love to walk around with no shoes on and be a flower child in California for ten years. It would be awesome to be a California 60’s girl. Actually, my grandmother grew up in Long Beach with five sisters, and they were the epitome of 60’s flower children, so I definitely have a thing for the time, it’s kind of a dream of mine.

NT: And on “East of Eden”, was that a direct inspiration from John Steinbeck’s novel, or did you just adopt the name?

ZD: I wrote that song when I was reading the novel. At the time, I had just moved to Long Beach and I was trying to find myself among the crowd of new people I was hanging out with, and that song’s about pushing boundaries and figuring out how innocent you really are or aren’t.

NT: You were featured as an iTunes single of the week and nominated for the Spotify “Emerge” program, two very digital forms of music access. What do you think of modern music platforms, and how do you prefer to consume music?

ZD: I rotate between Spotify and vinyl. I’d say that I’m a fan of music before I’m a musician, so Spotify has really opened the door to many artists that I probably never would have heard of if not for the “Related Artists” tab. I really think Spotify is amazing for discovering new music and for my career as well. My music has reached so many more people because of that platform and I think it’s incredible. My vinyl collection is always growing, and there’s nothing like making dinner and spinning a record by yourself.

NT: What should people know about your hometown Pinetop, Arizona?

ZD: Pinetop, Arizona is really cool because it’s a pretty discrete town. There’s no college there, so there’s not much going on in the art or music scene…there really isn’t one in existence. I had friends who played music growing up, but barely. I wasn’t in a band or anything; I was kind of isolated and alone in the music world. It’s cool to represent such a beautiful place, no one’s really heard of it before, but I always call it Arizona’s best kept secret. I wouldn’t be the same without it.

NT: What was the adjustment like for you going from there to L.A.?

ZD: It was very different. I didn’t have a mall where I grew up, only a Wal-Mart, so every now and then we would take the drive for four hours and go to Phoenix for shows and shopping. Pinetop is very small and the whole town shuts down at 10 PM. I think when I left Pinetop I was hitting the ceiling, it had nothing left to offer me. When I left I was ready to go, I wanted to run away. When I arrived in California, it wasn’t just a culture shock; it was me realizing that I was way more of a small-town person than I had thought. I miss Pinetop now, and my realization of my love for my hometown has really helped me finish my record in some ways. I always have kept my country-western conservative roots somewhere within, and I think that on this record I embraced it more than I would have if I still lived there.

NT: On your Instagram feed, you seem to care a lot about different looks and fashion. What role does fashion play in your life?

ZD: I’ve always really loved fashion. Thank god for the internet, if I didn’t have the internet I would have been a little bit oblivious to what was going on outside of my town. I think who really made me turn a corner with fashion as a kid was Gwen Stefani. I remember looking at Gwen Stefani and being like “oh okay, so that’s what funky looks like”. I was taking risks in high school and wearing things that people made fun of me for. I have family in California, so as a kid I would come out here all the time. My uncle owns a fresh fish market in Santa Cruz, so growing up I would go out there every summer and I was around different cultures. I would say I was a little bit more worldly than some of the kids I grew up with who never left. Doing things outside of Pinetop really influenced my personal style. I was relating to the hippie scene growing up, so I wore a lot of knit beanies and moccasins and had flowers in my hair. I think it’s important to look the way you sound, because performance is a spectacle and an experience, and you want that person on stage to embody what they’re singing about.

NT: What are your other interests outside of music?

ZD: I grew up playing soccer, so I’m kind of sporty, and I surf whenever I can. I grew up snowboarding and I would play music in the ski lodge. Instead of getting paid, they’d pay me in lift tickets; it was a lot of fun. I’ve been getting into photography recently, and I have a whole pile of Polaroid’s in the corner of my room. I also just moved into a new place so I’ve been obsessed with decorating, and you’ll find me at flea markets every Sunday.

NT: What should people expect at your Portland show on Friday, February 13th at the Doug Fir Lounge?

ZD: Performing for me isn’t as much performing as it is hanging out with the people in the room. Whenever I play, I try my best to feel connected to the audience. Without that connection I feel really lost. What you should expect is me talking to you, hanging out, playing my guitar, and rocking out a little bit. I’ll definitely be doing some new songs from the record that nobody’s heard yet, so that’s exciting.

NT: What would be your top 5 albums of all time?

Simon and Garfunkel – The Sound of Silence
The Zombies – Odessey and Oracle
Bob Dylan – Blonde on Blonde
Lauryn Hill – The Miseducation of Lauryn Hill
The Jackson 5 – 20th Century Masters: The Millennium Collection: Best Of The Jackson 5