Our Interview with Salad Boys 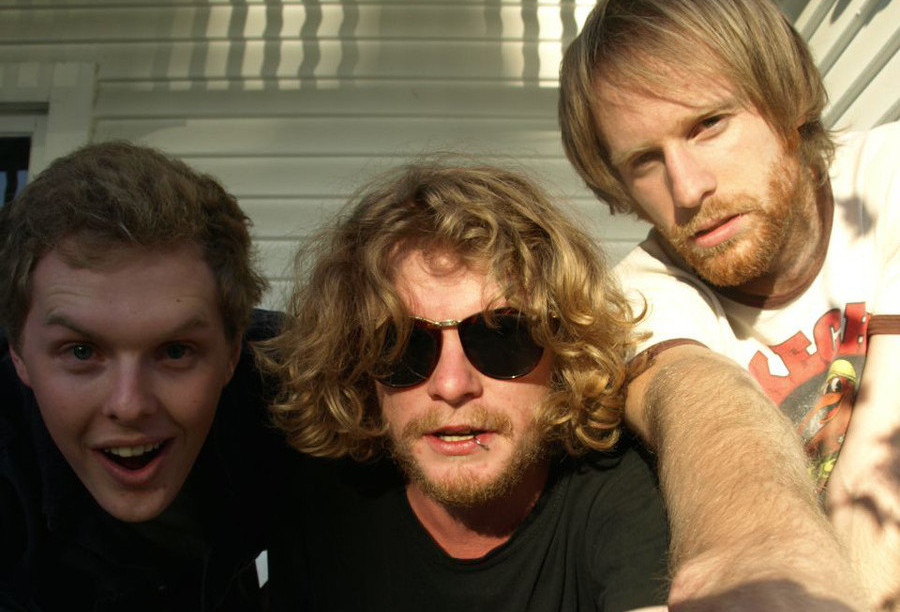 Christchurch, New Zealand trio Salad Boys – made up of members Joe Sampson (12-string guitar/vocals), Ben Odering (bass) & Jim Nothing (drums) – are set to release their debut LP Metalmania September 18 through Chicago label Trouble In Mind. But don’t get hung up on their quirky band name, taken from a misheard line in the second verse of The Feelies song “Fa Cé La”. Their sound is anything but peculiar, rather the band’s music greets the listener with open arms, blending together an instantly catchy & diverse set of pop tunes. The band will embark on their first ever US tour later this fall, as well, with stop-offs at Goner and MidPoint Music Fests, as well as a show at Third Man Records. I caught up with band to talk about making music in New Zealand, their debut record and their exciting plans for the release.

NT: Hey Salad Boys, thank you for taking the time to talk to Northern Transmissions! Where do I reach you today?

Joe Sampson: Thanks for having us! Today two of us are in Christchurch and one is in Auckland, all three in New Zealand.

NT: For our readers who don’t know the band would you mind explaining how you formed and how you got your cheeky band name?

JS: We formed in Christchurch about three years ago as a side project from our other bands. The other bands floundered pretty quickly so the Salad Boys became our main focus. We got our name from a misheard lyric in a Feelies song. (Fa Ce La – at about the 1:21 mark).

NT: Your bio reads “location is everything”: how has Christchurch and its music scene influenced your own music?

JS: Difficult to say. Being in Christchurch has undoubtedly had an influence on our sound and our lives but I think it’s better to keep the explanation for that arcane. Picking apart details like that can sometimes ruin things. We’ve grown up on a mixture of music from New Zealand and everywhere else, our inspiration comes from loads of places, like it does for every other band.

NT: You mentioned that you prefer playing DIY spaces and house parties, do you still get to do that as often now, and how do you offset that when playing larger venues?

JS: Yes, I imagine we’ll always be able to. New Zealand has dozens and dozens of talented musicians and wonderful bands, people tend not to rise above each other, if they do, they get cut back down to size. We haven’t really played any large venues and I’m uncertain if we will any time soon, but if we do I’m pretty confident we’ll adjust.

NT: Let’s talk new album. Your debut LP Metalmania drops on September 18th, how have some of your new singles been received?

JS: Good thanks. Dream Date seems to have done well, as has No Taste Bomber. We’re about to release another music video for the last song on the album First Eight. It’s probably not as accessible as the previous two but it’s the band’s favourite off the album and we also thought it would make for a great video.

NT: Can you tell me a little bit about the recording and songwriting process for the album? Did any songs off your self-titled mini-album make it onto this one?

JS: The writing process for the album was unusual as we were split over different cities when recording began, so the result isn’t the most reflective of how we actually sound in a room but it gave us the opportunity to explore and experiment a little more. The recording process was fairly stop-start, all who were involved were equally busy with other things so it took quite a long time, but again that gave us the opportunity to indulge to our heart’s content, for good or ill. Five of the songs from our demo tape were rerecorded for the album as I felt they needed more work, it surprises me that people consider that thing an album!

NT: Did you have a vision in mind going into the album… and did you know that it was going to turn out the way it did?

JS: There was a vision but it changed so many times because of the time it took to put together. Eventually the album became a collection of 10 different feeling and sounding songs (to us at least), so the goal was to serve each one in it’s own right, rather than looking at the album as a whole. We’d probably prefer to do it the opposite way the next time, but that requires us rehearsing and working on songs regularly and finding an engineer and studio who has the time and ability to do what we need them to – two things that are easier said than done!

NT: What kinds of influences did you draw from on Metalmania?

JS: Songwriting wise it’s an accumulation of everything we’ve listened to since we were kids. I can’t imagine it being any other way. Production wise it’s the same again, although our decisions for mixing and engineering were probably more conscious, each song seems to have a more obvious or particular point of reference.

NT: Finally, do you have any exciting plans for the release?

JS: Yes, a tour of the United States! This is our first time as a band and my first time in the USA and we’re stoked, excited and nervous. The tour begins in Chicago on the 23rd of September, come down!