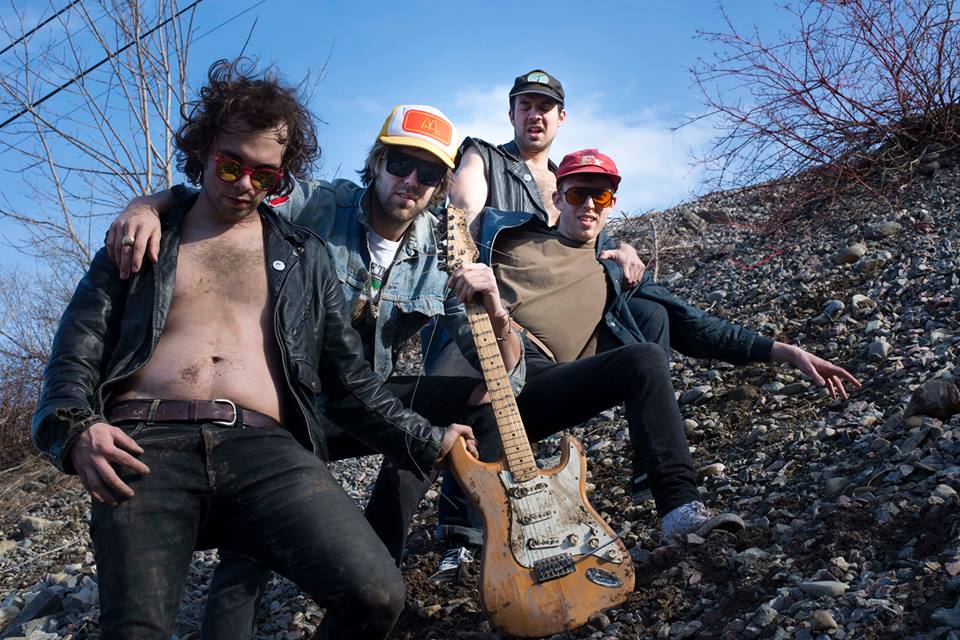 Notoriously known for their insane antics, both on stage and off, Ottawa’s New Swears are a group of longtime friends who just so happen to love making music as much as they love to have a good time. New Swears was born in the basement of a house belonging to Beej Eh, Sammy J. Scorpion, Scru Bar and Nick Nofun. The Fun Boy Clubhouse, as it became lovingly dubbed, housed the boys and many other artists, both local or just passing through Canada’s capital. No matter the wreckage that they may have left in their path, New Swears have their sights set on big things. One of the newest signees to the reputable Dine Alone Records, the band recently dropped a 7″ and have made more rounds of the southern Ontario concert circuit. Still donning their tutus and cheetah leotards from ballet practice, the guys lent us some of their time to discuss the controlled chaos of their live shows and the place upon which their musical foundation was built.

Northern Transmissions: I wanted to congratulate you on your signing to Dine Alone. How have you enjoyed your time with them so far? How did your paths cross? I know that you were on their showcase bill at Canadian Music Week earlier this year.

New Swears: Yeah, we played Let’s Be Frank with Music Band and then that same night we played at the Horseshoe with Jeff The Brotherhood and The Sheepdogs. There were a lot of bands that we look up to so it was pretty cool.

NT: The label seems like a good fit for you, being alongside artists like Music Band and Diarrhea Planet. Did they just come across you from playing gigs?

NS: I think they got word of us just through friends and from us playing shows in Ottawa and whatnot. It’s a great vibe. It’s magic, really. Eventually we went to Toronto and they watched us play a couple times. We love them and they loved us. It’s a good relationship. We just hit it off.

NT: You mentioned Ottawa where you are from and very involved in the local scene. How did your relationship with the city first start? What kind of early experiences did you have?

NS: We’re all from here and we all grew up in a part of town called Bells Corners. We probably got our start in the music scene when the four of us in the band – me (Beej), Benny, Nick and Scru Bar – all moved in together into a house in Ottawa.

NS: Yeah, exactly! We started throwing shows in the basement and through that we met a lot of local bands and out of town bands. We were hosting bands as much as we could. Like, every weekend. We tried to hook as many bands as possible and make it a comfortable experience. Other than that, you just kind of get out there and play shows.

NT: I was going to ask about the Fun Boy Clubhouse. So, it’s a house that you were all living in together and just decided “why not make it a DIY venue too?”

NS: When we went to look at the actual house, we made sure there was a jammable basement. It actually came with a small riser stage from the previous people before, maybe years ago. We jammed down there anyways and we liked to host parties. At the end of us living there, it was primarily a show space. Living there was secondary, pretty much.

NT: Did being in that kind of environment that was so intensely passionate and lively all the time change how you wrote and performed your music?

NS: I think so, for sure. The space we were all living in was so crazy and definitely inspired a lot of the lyrics and the style of music too, I guess.

NT: The videos too.

NS: Of course, the videos. The videos are all filmed there.

NS: No, we moved out two years ago probably.

NT: Are you still running a venue of any kind back home?

NS: No, none of us are right now. We all kind of just split different ways.

NT: Regardless, it sounds like a good place to grow and find your start.

NS: It got a little crazy there towards the end. At one point, the landlord was trying to come after us and the police were watching all of our videos and had a detective trying to find us. He found us but we got away.

NT: You’re obviously known for your notorious, crazy, partying type of ways and your live shows are a good representation of that. Have things always been this wild for you guys?

NS: Since day one. Since birth, probably. Have things always been this crazy? You know, you might as well have some fun. You’ve gotta break a couple eggs if you want to make an omelette.

NT: Is your live show still something that you are working on? Do you craft it or is it kind of just a spur of the moment shit show?

NS: It’s definitely evolving, for sure. We try and add something new to every show we do. It is a spur of the moment thing but we try to push the boundaries a little bit every time. Make it exciting and new.

NT: What’s something new that you’ve done in the live show recently?

NS: We actually all got ordained and did a wedding reception at a show. It’s real, too. We have a list here of people interested.

NT: No fucking way. That’s great. Has your live show been influenced by any other artists or is it just all New Swears?

NS: We like the pop concerts. Britney Spears is a major influence. NSYNC, Sideshow Bob, boy bands. It’s a little bit of a joke but the backdrop of the dancers and stuff on stage. We’re trying to get more of that and you’ll see it in our live shows.

NT: What are your hopes for New Swears in 2017? I’m sure you’re going to be releasing a full-length and touring a lot.

NS: Yeah, we’re on our way to the studio right after this interview actually to finish mixing our full-length record. Hopefully that will win us an Oscar or a gold medal.

NT: Are there any specific cities you have yet to play but are dying to?

NS: Hamilton! We were supposed to play but due to unforeseen circumstances, we had to cancel it. We are going to hopefully reschedule though.