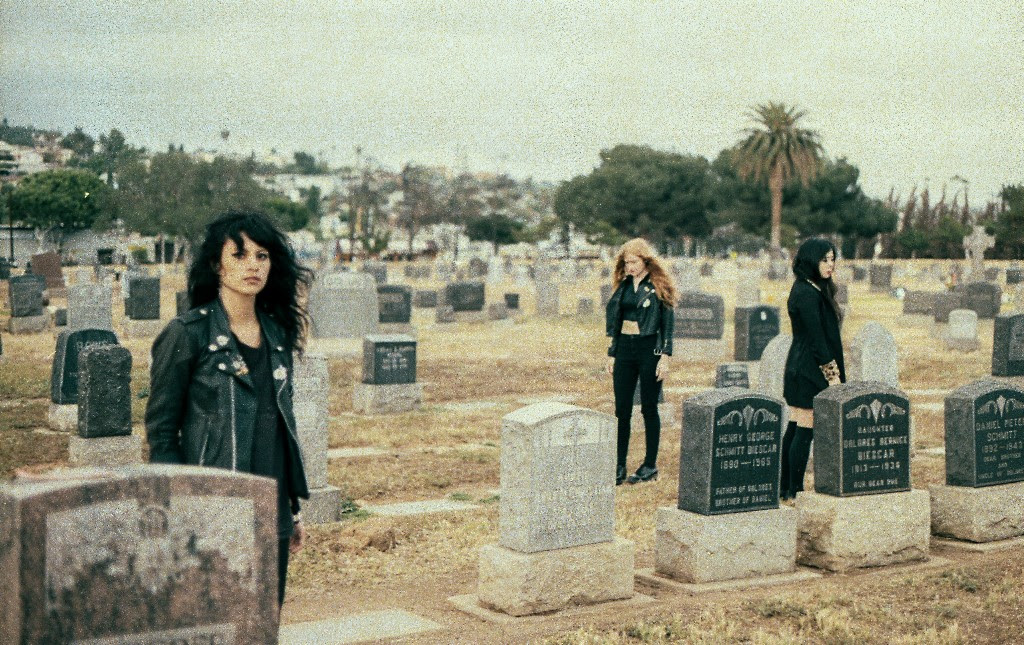 Reverb rock goddesses L.A. Witch are poised and eager to embark on their first full length run of North America opening for The Kills, a band whose likeliness they share. The Angeleno trio consisting of Sade Sanchez (guitar/vocals), Ellie English (drums) and Irita Pai (bass) continue to prove that they have the chops within their dark and languid sound. With their most recent release, the Drive Your Car 7’, has come even more buzz and excitement surrounding the ladies and their very bright future. Northern Transmissions caught up with two of the three witches during some time off in between SXSW and their spring tour.

Northern Transmissions: Can you tell me about how L.A. Witch came to be?

Sade Sanchez: Four years ago, Irita and I met through a mutual friend. We had two other girls at the time, who are no longer in the band, and one of them was a drummer. After we lost our drummer, I knew Ellie from high school ‘cause we played in a band together so I just asked her to fill in on some shows and then she kind of just stuck. (laughs)

NT: Your sound has been described as “reverb, punched out rock” to “experimental and raw.” How would you, personally, best describe L.A. Witch?

NT: You guys are just coming back from tour. Where did you play last?

Irita Pai: We did SXSW in Austin for the first time, which was pretty busy. We had a show everyday.

NT: That’s awesome, how was that experience?

IP: Well, I got sick with the flu so I can’t really say I had the best Southby experience.

SS: We actually all got sick. It was funny because first I got sick, and then Ellie and Irita got sick. I recovered, Ellie recovered, but Irita didn’t recover. It was fun because it was in Austin and we really love Austin, and it was cool because we saw a lot of our friends and a lot of cool bands. I guess the only bummer was being sick.

IP: It was fun; I just wish I had been able to experience it more.

NT: That’s the worst timing! What was the best set that you managed to catch in between all of your showcases?

IP: I saw Malus who were really good. There were a lot of the same bands that kept playing, like Thee Oh Sees who were amazing.

SS: There were a lot of bands I saw and really liked that I didn’t catch the name of, so now I’m like “Damn, how am I going to figure out who that was?”

NT: Sickness aside, do you hope to go back next year?

SS: It depends, if it’s as good as it was this year. I think, for us, it was cool because we got to play the same venue three days in a row. That made life so much easier and it was a favourite venue of ours. We played on a boat too, which was rad. I think if it was something like that, with not too much going back and forth. You don’t have to carry your equipment around from crazy destinations or anything like that. I think we were really lucky to have such a good first time experience and get on good showcases with a lot of really cool bands.

NT: How do you feel coming into your upcoming North American tour with The Kills, which is pretty cool – a band you’ve been compared to in the past.

SS: We’re really excited about it, and we’re really nervous about it too. I think it’s going to be one of the longest tours we’ve ever done and one of the most real. It’s kind of on a different level playing with a band like The Kills. I was totally in love with their first and second albums and listened to them like crazy growing up. It’s still a little bit unreal, you know?

NT: It’ll be a great opportunity for you. What other fellow female artists within the industry inspire you?

SS: I really like Poison Ivy from The Cramps. I think she’s an ultimate badass – her style on stage and her guitar playing is amazing. just think everything about her is really cool. Kim Gordon – another chick who is super, super badass. Her book was really good too, I just read that on tour. It’s really inspiring and a good tour book too, because it talks about touring and music and all of these things that you can really relate to.

NT: You have been around for four years, as you said. What would you say is the most valuable lesson you’ve learned during your time as an artist in the industry so far?

IP: It’s harder than it seems. People are always like “It’s so cool that you get to tour and see all of these places!” and it’s like, we actually have to make time. You have to wake up super early to be able to do anything. The drives are super long and it’s hard to be away from your family and the people you love. But you get to tour with your best girlfriends so it’s been a good experience, for sure.

SS: I don’t know if I can pinpoint anything in particular. Being in a band is an overall experience and you learn a lot from it. The more you do it, the more you learn. I think just going on the road and stuff, you learn a lot just from travelling, and meeting new people, and you get to see a lot of new places. It’s really fun and really cool. I’m really happy that’s what we’re doing because I wouldn’t want to do anything else.

NT: I’m glad to hear that. Your latest single Drive Your Car has been released to well deserved, positive reception. Would you say that this is an idea of what’s in store for L.A. Witch?

IP: Yeah I would say that. It’s one of the sort of newer songs we’ve been working on. Our sound has really changed a lot since we’ve started, and we’re basically just kind of trying to find our growth.

NT: Is there a new album in the works?

SS: Yeah, it’s kind of been in the works for a while. We recorded and I think we’re going back to rerecord it. It’s funny ‘cause when you go on tour, you’ll play the shit out of your songs and then you’ll come back and you slightly end up changing things. It kind of grows, and I guess that’s why we’re cleaning up the last recordings that we did.

NT: Is the song writing process a collaborative effort between the three of you?

SS: Yeah it is. Normally, I’ll write the lyrics and come up with a part or something and then I’ll send it to the girls or we’ll meet up and kind of jam on it and then the girls will help me structure it and stuff.

NT: It’s great that you’re all such a big part of it. What have each of you been listening to the most, as of late?

IP: I’ve been listening to a lot of shoegaze. I don’t know why; I guess I just wanted to mellow out after tour.

SS: I don’t know. My iPod’s still on shuffle so it’s a really weird mix. I did get back into hip hop recently.

IP: Oh yeah, there was a lot of hip hop in the van on this tour. 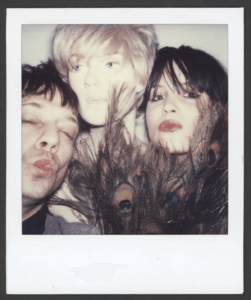