Interview with Jane Penny Of ‘Tops’ 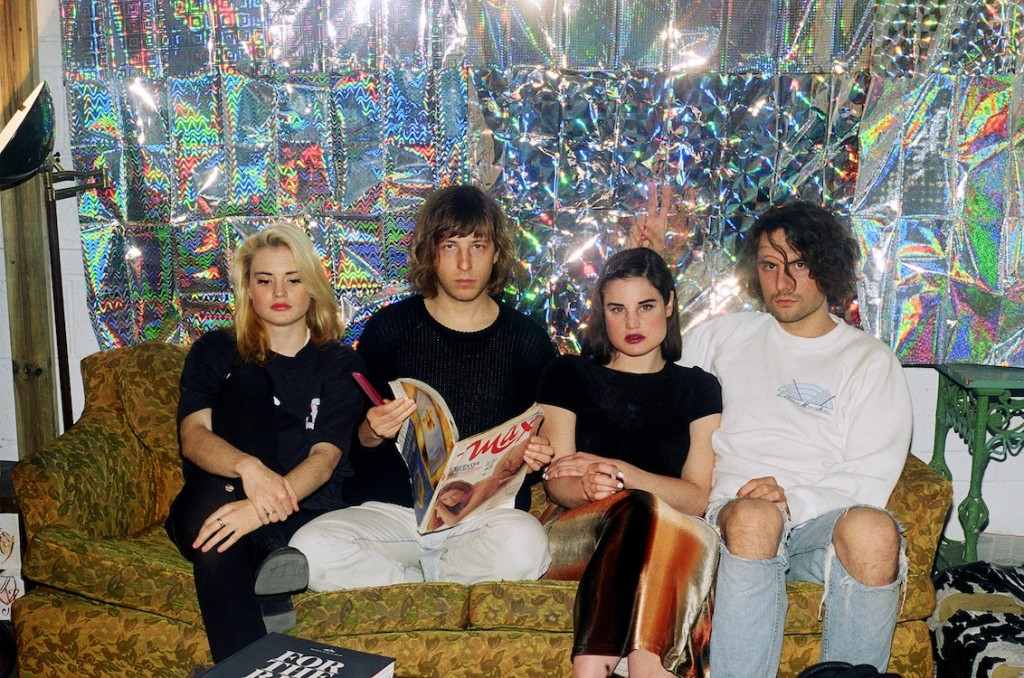 Jane Penny is the charming voice behind catchy Montreal pop group TOPS. She is also the director behind such videos as “Change of Heart”, and loves to do things on her own, proving to be a true DIY enthusiast. TOPS had a great 2014, with lots of touring, recording, and the launch of Picture You Staring, their sophomore album. Staring is influenced by Fleetwood Mac, Chic and other classic rock acts, but has the inimitable fingerprints of Jane and her colleagues throughout the album. Northern Transmissions wanted to know more about this great band, their process of recording, opinions on the current musical scene that is blooming in Canada and Mac DeMarco´s inspired participation on the music video for their song “Way to Be Loved”.

Jane – It was really good (laughs). We were touring a lot at the end of the year, so, I guess it was a big year. We were conceptualizing the record and finishing it at the beginning of the year, and then putting it out in the middle and then playing a lot of shows all around the world in the end. So, we had a lot of stuff to do.

NT – Do you think that your second record, Picture you Staring, was a breakthrough?

Jane- I hope so (laughs). But that’s cool, it’s awesome to find people that have found us and it´s really cool to be playing shows for people and at places that I´ve never been before. It’s great.

NT – Mac DeMarco hilarious participated on “Way to Be Loved”. How did that go? Do you think there will be another collaboration between the two bands?

Jane – I don’t know if we will collaborate. We both have our own studios and I think we like to work on our own stuff, but I really like his recordings. About the video: he was just there along with all our friends, so it made sense for him to just do his thing (laughs).

NT – But did you see that coming (ed. note: showing his testicles on video)? Was it previously in the script?

Jane – Actually, I didn’t even know if he would come; it was supposed to be like a happening. So, we set the stage: we invited people that would do interesting things. It was supposed to be a social experiment with a lot of alcohol. He is very entertaining!

NT – What do you think are the big differences between Picture you Staring and Tender Opposites?

Jane – Well, Picture You Staring was just Riley (Fleck) Dave (Carriere) and I, who wrote and recorded it all, so we were engineering all of it and listening to it very closely. It sounds a lot like the three of us and other parts are almost just electronic where Dave and I tried to do different recordings and then having a live band jamming with us. It was kind of a mix, we were trying to do a pop/studio album, but doing it ourselves, on our own terms.

NT – You could see through the the cover art of Tender Opposites which was darker than Picture You Staring, which had a more colorful image, that the sound would change.

Jane – Yeah, I wanted Jessica Dean Harrison to do the paintings. Photographs are fine, but I like the idea of using of people’s artwork in the space that you have because you don’t have many places to express yourself. It´s nice to use it for that kind of thing, you know? Something nice to look at, something aesthetically pleasing. I think she did a pretty good job.

NT – Picture Yourself Staring is an album of breezy AM radio-inspired hits, but for me it stands alone as a catchy pop album. How do you attribute this lucidity in your compositions?

Jane – Well, Dave Carriere (guitarist) has always been a strong pop songwriter, like the guy that people would remember his songs, even when he played at small venues and concerts a long time ago in Montreal. I think it transmits an idea that sticks in your head because it means something, it plants a seed in your head. He makes the kind of songs that last long on you. Rather than something that you listen to and then you forget. The idea is to create something that stays in your mind and them you go back to it, hopefully without being super annoying (laughs).

NT – I can see that you have the same kind of pop feeling of bands like Fleetwood Mac. Were they an inspiration to you? What are your main inspirations?

Jane – Well, I am very inspired by Steve Nicks (laughs), her voice is incredible. I really like their drummer and so does our drummer, Riley. He really wanted to focus on our production in the same sense: to record a drum kit and make it sound really good, clean, you know? Dave is very influenced by Chic, their guitar player Niles Rodgers and guitar players like that. He grew up listening to classic rock so he has all those influences.

NT – You can hear Chic’s groovy influence on this record.

Jane – Yeah, we like to play together, so I think it’s what makes it groovy, you know? A combination of a lot of live instruments.

NT – Your record, as you said, was DIY. Do you expect to continue with this kind of production or is it a thing that could change with time?

Jane – Well, we´ve been at home in Montreal for about a month right know, and we are working on new music a lot. I think we might record with some friends, but it’s pretty much the same thing, we are recording at a friend’s studio where everything is set and we can hang out. I mean, I can’t see us ever working with a ‘producer’, unless it’s a collaborative, fun, positive kind of thing. It’s hard to say, but cultivating our own sense of production and learning how to do things is much more pleasant at the end, you know? You earn the sound, so it’s very pleasant. We just want to keep working on that and to developing it more.

NT – How to you feel about the Canadian music scene right now? Do you think it changed a lot in the past 20 years?

Jane – I think that there are a lot of new artists coming out right now, or just older ones that people are starting to discover. There is definitely something new in Canada that I like and I think it has to do with the internet, where we are all kind of living together. It’s hard to explain because you can´t grab too much on TV being Canadian. Our national TV broadcasts have those bad stereotypes. Right now, there’s a lot of good music and musicians that I admire coming from Canada.

NT – Do you think there are different kinds of music coming from Montreal, Toronto and Vancouver, right now?

Jane – Yes, I think we have different kind of scenes, for sure. And I think that where people come from affects the sound as well. Like Edmonton, where I grew up, has a different type of sound from the one being made on Vancouver or Toronto.

NT – What could you say about your label, Arbutus Records?

Jane – There are a lot of artists in Montreal, and I think Arbutus has been always part of it, not necessarily directly but in a supportive kind of way, you know? Even people who are not signed to the label hang out in the office and at the shows. It’s a really small thing, and Sebastian (Cowan, the founder of the label) still handles a lot of it himself, like answering e-mails and that kind of thing. It’s not a really large operation, but I like it because for me his interest in us expressing ourselves through the videos and music is really cool. It’s a business that has a bigger approach in art, you know? There is not a commercial standard that we are supposed to achieve, it’s the ideals that we have and I appreciate that.

NT -What are your expectations for 2015?

Jane – Well, we are going to Japan in February, which is crazy and exciting. After that, we will do a bunch of shows in the US, then go Mexico, and finally Europe . There’s a lot of touring this year. We will make a bunch of songs and we have a couple of music videos from Picture You Staring that I want to finish. So, this year, it is: a lot of shows, new music and videos (laughs). That’s what I like to do!