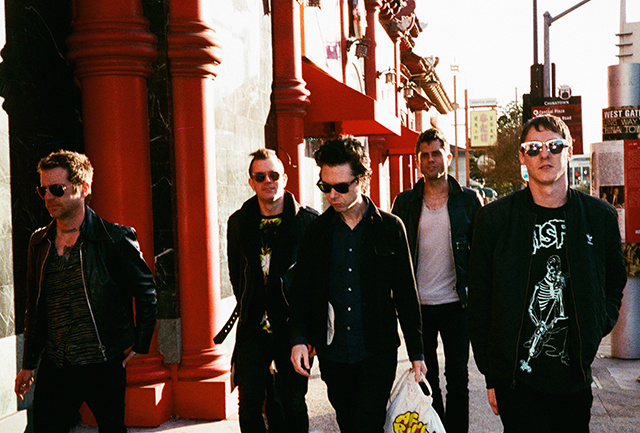 Chances are that you never saw Head Wound City live before this year. The super-group composed of members from The Locust, The Blood Brothers and Yeah Yeah Yeahs released their EP in 2005, then disappeared completely soon after playing their first and only show. Initially devised as a short side-project to spend time between touring with their larger bands, Head Wound City is preparing to release their first full length album and first new music in over ten years on May 13th with “A New Wave of Violence”. The new record is an absolute scorcher, led by standout tracks “Scraper” and “Born To Burn”. We reached lead vocalist and former The Blood Brothers leader Jordan Blilie at home in California:

Northern Transmissions: This is your first batch of new songs with Head Wound City in 11 years, did you pick things up right where you left off, or was there some re-adjusting to playing with the rest of the guys again?

Jordan Blilie: I think we kind of just picked things up where we left off. I’ve kept in touch with all of them over the years, they’re all friends, and years ago we only spent a week together writing and recording, so it wasn’t like we had a long playing history together. We were all friends of course, but since we didn’t really have that much time together to start out with I think it allowed us to have a very fresh approach to the album, it felt like we could really try out a bunch of new ideas and not be beholden to any past work or any personal expectations. We were able to be really free and explore whatever ideas came to mind.

NT: What changes do you hear on the new record that weren’t there on the EP? Esthetically, the first single “Scraper” is already longer than any of the songs you released previously.

JB: I think the album is astronomically better than the EP. On the EP we just spent a week together writing and recording it and it was really only meant to be a fun one-off little project to take us away from the rigors of the full time writing, recording, and touring cycles that our primary projects were pretty deep into at the time. So as such, the first EP was fun for fun’s sake, nothing more nothing less. We banged it out super quickly, played one show, and that was it. Coming back to the band, ten years on, we wanted to make something that was a lot more substantive and a lot more focused. We really tried to push things as far as we could and broaden the types of sounds and parts that we incorporated into each song. I’m very very happy with how the album came out. To me it sounds very focused and very direct, but at the same time I feel that we were able to expand the pallet a little bit and try out new things. It felt really great, the whole thing was a blast to write and record. We were all able to hone in on one wavelength together and there was really no conflict whatsoever, we just went where the ideas took us because we were open to trying anything. I think that because we were having so much fun together it opened up a lot of creativity. I’m just really pleased with it, I honestly didn’t think that I’d be making a hardcore record in 2016. I’m turning 35 this year, and after the Blood Brothers had done a few shows a couple of years ago, I saw that as kind of an end, a nice way to bookend my time playing music. I was thinking of going back to school, maybe start a family, and having Head Wound City come along again has been very surprising to me and I feel very fortunate and very happy. It’s been kind of a blast.

NT: From the outlook of turning 35 and The Blood Brothers reunion being a “bookend” to your hardcore career, it actually sounds like this would be the worst time to get the band back together. What made this the right time for a new album?

JB: It’s just one of those things that came about by happenstance really. Nick (Zinner) had the opportunity to curate the music for a festival in Echo Park and he asked us if we wanted to do it, and it was just a time where all of our schedules happened to allow for it and we all decided to get back in to it. You’re right, the main problem with this band is scheduling conflicts because we all have a lot more responsibilities than we had when we were kids, we have two dads in the band, but I think that everyone was excited about the prospect of creating something new and playing together again.

NT: How did Ross Robinson’s contribution as producer help shape the new album?

JB: He was absolutely wonderful. Cody and I did our first major label record with him, The Blood Brothers album “…Burn, Piano Island”, when we were only 19 and 20, so the first thing that was really blowing my mind was working with him again at a completely different point in my life. It was just kind of blowing our minds. I think that the main contribution that Ross makes comes from him being probably the most positive person I’ve ever known. He doesn’t have a cynical bone in his body, and when you’re working with him it’s like he’s your greatest champion. He really believes with all of his heart that you’re creating something important and vital, and what that does is it creates a very positive space where creativity can flourish. I believe negativity is just the antithesis of creativity, I’ve always found that it’s impossible to create when you’re in a negative headspace, all it does is block creative impulses. He also has extremely fine tuned ears for drums, great insight when it comes to song structure, and he just gets the best possible performance out of the band. He pushes you probably harder than anyone that I have ever worked with, but the result is an experience that I found incredibly special, especially being able to do it again as an adult when I could appreciate it more. We spent weeks getting my voice in shape, he wanted my voice to sound like I’ve been on tour for a month, and it was just the two of us at his house singing everyday until my voice would blow out. I’ve never spent that much time doing vocals in my life. There were times where I was inevitably questioning the process, but the end result is something I couldn’t be happier with.

NT: Speaking about lyrics and vocals, what issues did you tackle lyrically on the album? Do you think we need hardcore more than ever to help get through the day’s bullshit politics and state of the world?

JB: Unfortunately, that’s exactly it haha. I can’t say whether or not hardcore is any sort of solution, but it certainly provides a space to vent frustrations. I think that in general I tend to write about things that are socio-political in nature and I’ve always really preferred writing that spells out political ideas in a bit more of an abstract way. One of my favourite songs would be Bob Dylan’s “A Hard Rain’s A-Gonna Fall”, and what I love so much about that song is that the imagery and story that he puts together all lives in the abstract. It’s vibrant, and rather than spelling out a political message in very concrete terms, it’s more open ended and observational. It’s all questions and observations, and the imagery that he puts together really becomes political in nature because it’s reflective of a world that is violent, full of people exploiting one another, and it says all of those things but in a way that allows the reader to really open their mind. A song like that to me is the high water mark and it’s inspirational. Instead of standing on a soapbox and preaching, I try to let the imagery invoke some sort of that psychological dread that living in modern times sort of inflicts on you. That generally can be said of about 90% of what I write on the record, I really wanted to engage in the current moment as the title would imply. Violence is seemingly ever present, it’s an ubiquitous part of the human experience, and so a lot of the lyrics touch on that.

NT: For Record Store Day you released a cassette single of “Scraper” and a Ministry cover. When’s the last time you listened to a tape cassette and why did you choose that instead of a 7’’?

JB: I liked doing a tape because tapes are kind of this weird ephemera from a time that doesn’t exist anymore haha. I like the fact that you could listen to it if you wanted to dig out your old tape player from your garage. When I was maybe in 3rd grade, the first form of music that I bought were those old “cassingles” for like a dollar. I’d get like a Janet Jackson or TLC song in those very simple cardboard sleeves that didn’t even have a plastic case around them. I wanted to do it because it’s just almost obsolete technology. I think that we didn’t put something together in time to release a 7’’, so we went for cassette haha.

NT: When Head Wound City first got together you played only one show, what have the shows been like so far and do you find the record translates well to live performance?

JB: When you play new songs that no one’s heard before it’s harder because the audience won’t be as interested as in the old stuff, but in our case no one saw us play the old stuff. From the band’s standpoint, we love playing all the new songs. It’s always a challenge when you write a record to then play them live, but I think that the more we play together the more the chemistry gels and the more intuitive those songs become. I think that first and foremost the band is predicated on us having a fun time together, and the music itself is meant to be fun, so when we play all together it’s always a blast.