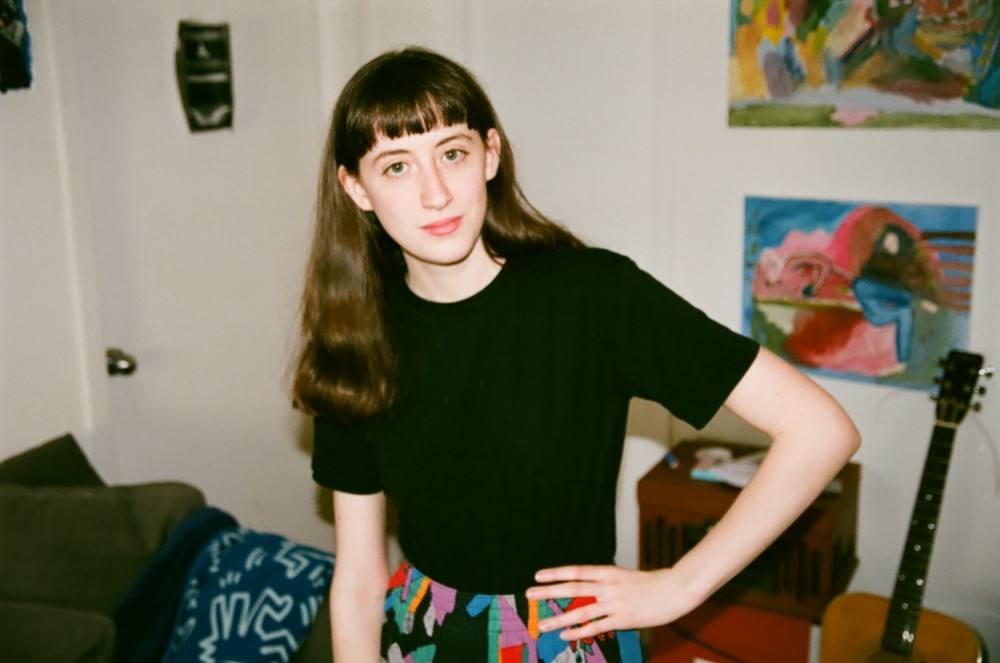 Hailing from NYC, Greta Kline aka Frankie Cosmos, has been releasing home recorded albums like crazy. The twenty-one year old, continues to tell her story in Frankie Cosmos’ latest EP, out November 13 on Bayonet Records. The record label will also release the band’s sophomore release in the spring of 2016. I caught up with Frankie Cosmos to see how excited she was for the release of her electronic-infused EP, the forthcoming second full-length, and what advice she has for aspiring musicians.

Sean Carlin: Let’s talk about your forthcoming EP, Fit Me In. You released your song ‘Young’ the other day. How has it been received so far?

Frankie Cosmos: Ummm I dunno… I mean my fans like it. I’m excited about it. I don’t really know how to tell how it’s been received, but hopefully good [laughs]

Sean Carlin: For our readers who may not know, when did you decide to start going by the Frankie Cosmos moniker, and what inspired it?

Frankie Cosmos: It was around November of 2011, maybe December, and it was just a nickname that Aaron made up for me and it just kind of stuck. I just thought it was good as a band name. It’s funny, I feel like its kind of rare that people use a person’s name as a band name, but it kind of works. It’s more of a concept than a character so it just stuck around [laughs]

Sean Carlin: As far as your forthcoming EP, how did you land on that title?

Frankie Cosmos: I was actually writing some lyrics with the words Fit Me In, in it which aren’t actually on the EP but I thought it was a good phrase. It’s kind of about fitting myself into culture and myself in the context of the world as a person, and as a writer. I just thought it signified something about the EP. It’s kind of a weird sound for me so it’s about fitting myself into pop music, or electronic music, or something, just something different for me.

Sean Carlin: Yeah. That’s what I was going to get to next. What peeked you interest and made you want to experiment with an electronic sound on this EP?

Frankie Cosmos: It wasn’t a like a really thought out thing. It was kind of like just for fun, and then it just happened that Bayonet wanted to put it out and so now it’s an EP, but I’m still viewing it like it’s an experiment. It’s funny because it definitely doesn’t signify anything about the future of my music. We already finished our forthcoming album for the spring which is nothing like the EP so it’s kinda just like a weird, fun thing to do. We had the equipment at our house and we just started messing around with it.

Sean Carlin: What were some of the challenges you faced with that aspect of the EP?

Frankie Cosmos: I mean, not really. Aaron who recorded it with me, he was amassing like electronic recording equipment so as we were working on it he was learning more about how to record, and figuring out how to get the right sounds and so we ended going back and making a lot of changes later, but it wasn’t really a problem it was more fun to have, just more stuff to do. It wasn’t like, “oh the old one sounds bad,” we we’re just excited to keep messing around with it. It ended up sounding just better, I guess. There was never a moment where we got stuck, or didn’t know how to do something. It was really just like we were messing around, and kind of fell upon the sound.

Sean Carlin: Could you tell me about one of your favourite tracks from the EP and tell me a little about it?

Frankie Cosmos: Sure! Well, there so few to choose from. I guess one of my favourites…I think my favourite might be “Young” just because it’s so self-referential. It’s about itself as a song almost, so it’s really funny to perform it. So I’m really excited about singing that one on the tour. Also doing it live is really fun because there are all these crazy harmonies. We worked out these three-part harmonies for when we play as a four piece. I just like it because it’s really personal to me and it’s about making music and being in public making music, and kind of balance being a real person and being viewed as a character, with these small facts about you being known, and no one actually knowing anything truer than that. I dunno, and just about fear and fear of growing up, and on another note just not feeling connected to a lot of my peers and not being into partying and not being into going out and having fun, just wanting to be at home. So its funny because I have this job that entails going out and playing shows and being in a party setting and yet I’m not really interested in the useful aspect of partying. So it’s just about a lot of stuff that I think about a lot, and about myself and so it’s fun for me to perform it I guess.

Sean Carlin: Do you feel like you’ve missed out on that?

Frankie Cosmos: Ummm not really. I don’t feel like I’ve missed out on anything, I just disconnected from the college experience. I think a lot of people in bands that end up on tour especially to cope through like drinking or just getting into the environment of the bar where you’re playing, and I don’t do that so I just have this outsider view. It doesn’t make me feel that bad. I like viewing stuff from the outside and just having my own experience of it.

Sean Carlin: You’ve put out tons of material, tons of EPs – where does the EP sit in your catalogue? How does it relate to your previous material?

Frankie Cosmos: Well I guess it’s the most spanned out sound of everything. So far I think everything has been pretty uniform in terms of the sound. I think the sentiment is the same, the feelings are the same, which is why I think it’s an interesting EP. I think it was interesting to make it because it’s like all the feelings are very me and very real and it’s just masked by this very fake, no me sound. It’s just kind of a weird thing. I just think it’s funny to hear my own voice singing about my own insecurities or moments over this kind of, poppy, current sound that I don’t really relate to. In that I think it’s really different from everything, but also a good continuation of my story. And I also released one of the songs on it previously as a demo, “Korean Food,” so that plays into the timeline, I guess.

Sean Carlin: Talk to me a bit about Bayonet records; they’re putting out your latest EP and soon your sophomore album. How did you choose to link up with them?

Frankie Cosmos: They just reached out to me and they are really nice people and they were starting this record label and it just seemed like a cool thing to be part of. They are just really passionate about starting it, and I’m excited to see what they do! Yeah, they’re just really good people. The label is their baby, they just got married and started a record label, so I think it’s really beautiful.

Sean Carlin How is this forthcoming album different from your first full-length studio album Zentropy?

Frankie Cosmos: It’s similar in a lot of ways. It’s recorded in the same place, and it’s similar kinds of songs, but it’s different because we took a lot more time to make it and it has more people playing on it, so there’s a lot more collaboration. Personally – maybe it’s because I know the musicians so well – but I can really feel the influence of all the musicians who play on it. You can just hear everyone’s ideas kind of bringing out the songs more versus Zentropy which was really just like me and Aaron, and Hunter who we recorded it with. So this one is like a four piece band and everyone has a lot to bring to the table. It sounds a little bit fuller, and the songs are newer and a little bit longer, and it’s longer as an album. I don’t wanna give away too much, it’s not out for a little while!

Sean Carlin: Just a few more questions to finish up, what did you take out of the process of writing and recording your forthcoming record? What do you hope people take out of the album?

Frankie Cosmos: Sure, I guess… what did I take out of the writing and recording? I mean it was a really different experience of writing and recording an album because it was the first time that I’ve done that after what it’s like to release music in a real way, so I think it’s a little bit more mature and I have changed as a writer and musicians since working on it and I hope people can tell and I hope people are excited about it as I am, I guess.

Sean Carlin: Will it have all original material, or will some of the songs from the EP appear on it?

Frankie Cosmos: No, it’s all new stuff. Although, there have been a couple songs that have been released as demos also but not the EP songs.

Sean Carlin: How do you generally approach a song? Is it more important to lay down a good melody or get your message across lyrically, so to speak?

Frankie Cosmos: I mean for me it’s both. It depends on the song really. Sometimes I care a lot more about the lyrics, and sometimes I’m writing lyrics around a melody I care about, but I feel like if a song doesn’t hit both things exactly how I want it to I’m not going to finish it. At this point I’m not interested in releasing a song that doesn’t do both for me. So I think lyric and melody are both kind of equally important. I think if it was only about the lyrics I would be a poet, and if it was only about the melody I wouldn’t be putting lyrics to it. It’s a weird process, it’s different every time. I definitely get the lyrics and melodies at different times often and then like kind of work to put them together later, like a puzzle [laughs]

Sean Carlin: Finally, what keeps you motivated to get to where you are today, what is your advice for artists who are trying to make it?

Frankie Cosmos: That’s a good question. I guess, I would say first of all, you know, the most important thing is to care about your art, and to be working on that before you worry about trying to make it as in being successful. I think that any kind of success that you’ll have if you’re trying to go on tour, or put out an album or whatever, it’s like if you care about the thing you’re making, you give it all your care and just worry about that. Let the people around you worry about the rest, I guess. If you’re trying to tour, being positive is really important, for me I feel like that’s what motivates me to keep touring and to keep writing. I love doing it. So my main piece of advice is to be really excited about going on tour, and meeting people and playing for all different people and just be excited about whatever situation you get put it, because otherwise you’re going to be miserable [laughs].