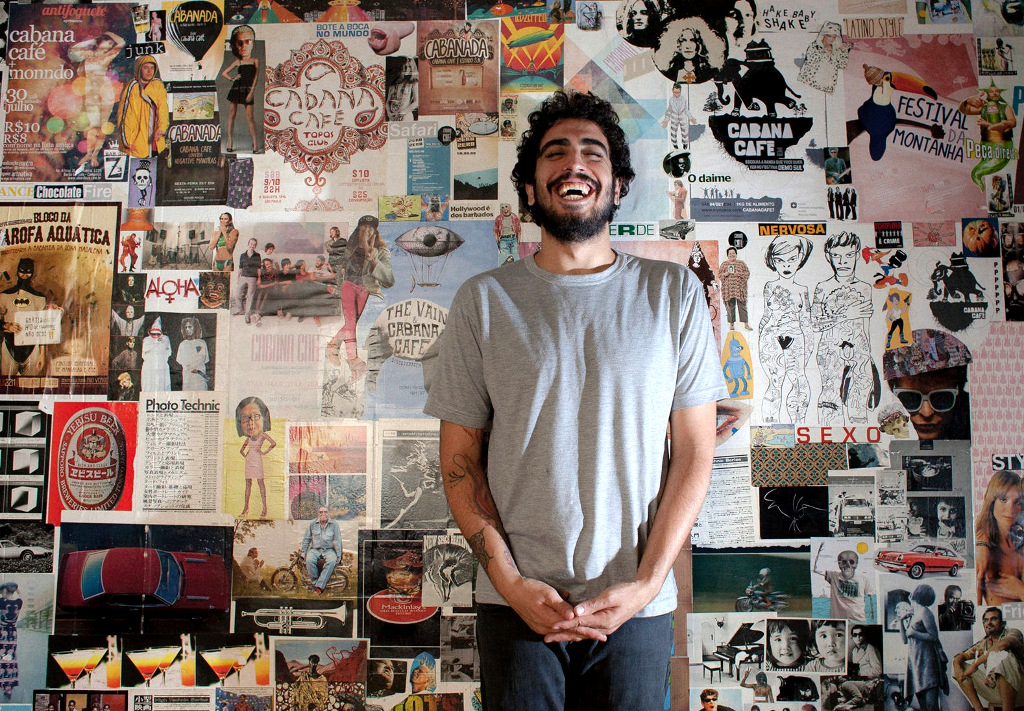 The musician and producer Julito Cavalcante likes to put his head to work. Most recently, Julito shows this off in his first solo project: BIKE and the debut album “1943” (2015 – Honey Bomb Records), a result of experiences with hallucinogens.

The album was produced by Julito and mixed in MonoMono studio in São Paulo. The mastering was done by Rob Grant, who worked with bands like Tame Impala, Death Cab for Cutie and Melody’s Echo Chamber, in Poons Head Studio in Perth (Australia). As a product, the sound waves and distortions break down any barrier on earth. Compounding the transcendental mood is BIKE, consisting of Diego Xavier (guitar and vocals), Gustavo Athayde (drums and vocals), Hafa Bulleto (bass and vocals) and Julito Cavalcante (guitar and vocals).

“If you don’t believe that there are brain waves, you’ll realize pretty soon the lack what they do when they are taken by the intoxicating sound that takes your feet off the ground and leaves you numb. This is BIKE and it’s ‘1943′”, declares Julito.

Sean Carlin spoke to BIKE about their latest effort, their jump to Danger Mouse’s new label 30th Century Records, and just plain being stoked to talk to each other.

Northern Transmissions: Hey! Are you in Brazil right now?

BIKE: Yeah, in São Paulo, where are you now?

Northern Transmissions: Well, I just wanted to say congratulations on your debut LP, 1943. How has it been received so far?

BIKE: We ran out of CDs, we sold all we had. We only made a few copies and we sold everything.

BIKE: Yeah man, we cannot complain! We’ve played a lot of places in Brazil, in a lot of states outside of São Paulo. I’m Hafa I play the bass and I have here with me Julito who sings and plays the guitar, and Gustavo who plays the drums. We are a quartet but our other guitarist, Diego is not here, he lives in another town.

Northern Transmissions: Well thank you to all three of you for taking part in the interview. I was hoping to start off by getting to know what it was like growing up in Brazil, and how you first got into music as well.

BIKE: Well Julito started the band as his personal project. He was thinking of recording all the instruments by himself and then he invited Diego to join the band and play the other guitar. They started to record it at home to see how it would sound and then invited Gustavo and me to join the band as drummer and bassist. We recorded the album in December 2014. In May 2015 we launched our first single which was “Enigma Do Dente Falso”, the song which is in the 30th Century Records compilation. Then we launched the second single in June, “1943” and the whole entire album in July.

Northern Transmissions: Your album is of course about your hallucinogenic experiences, what made to choose this as a focus for the album?

BIKE: So Julito says he used to write stuff when he was high on LSD. He always used to write it down on paper, just little notes. Then he started making music and using the stuff he wrote down before as the lyrics, as inspiration. All the music he makes is linked to the lyrics, in the way that we tried to make music that we think compliments the lyrics.

Northern Transmissions: How was the actual experience? Was there a memorable moment that is reflected in one of your songs?

BIKE: I think all the songs are about some situation that he wrote about when he was high. He told me the story about “Alucinações E Viagens Astrais”. The song tells the story about a time when he was in Amsterdam, in the Netherlands and he had an experience with mushrooms and LSD. He got a bike and took a ride around the city, him and another friend were really high. He tells this story in the song. And “Filha Do Sol”, I think it’s the sixth track, is about an experience when he was with a friend high on mushrooms and his friend started to think there was an echo. There was an echo for everything he said. He started calling the sun, “Sol, Sol!” and kept on repeating “Sol”… for three days [laughs]

Northern Transmissions: What were some challenges you faced with that aspect of the album?

BIKE: So we had a home studio and we recorded and mixed the album there virtually at home, and then we sent the tracks to Rob Grant. I don’t think it was a challenge but it was a cool thing that happened. We couldn’t imagine that a person like Rob Grant would do that. Also, I have never given an interview in English before this one [laughs].

BIKE: Yeah, we have our first single, “Enigma Do Dente Falso” – they’ve chosen it to be in their first compilation.

Northern Transmissions: How did that whole relationship come about?

BIKE: We received an email asking us about “Enigma”. The guy was Mike and he said they wanted to put our song on their first compilation, and then he called us and he was so excited about talking to someone from Brazil and we were also very excited because we’re talking to Danger Mouse’s guy. That was so cool, we never expected that. That was crazy.

Northern Transmissions: Just going back to the album, did any psychedelic bands play a part in shaping the album?

BIKE: Well we like the Grateful Deal, the Beatles, Pink Floyd, Tame Impala, King Gizzard and the Lizard Wizard, Temples and also bands from Brazil. And Country Joe & the Fish, punk rock bands – the Ramones, the Clash

Northern Transmissions: How do you think the music scene in Brazil helped influence the record?

BIKE: All of us are out of São Paulo, but not São Palo city. We came here seeking more opportunities for making music. Here, things happen all the time; this city is crazy. There’s a lot people, a lot of bands, a lot of places where you can watch concerts, and all this stuff inspired us. You go out Monday to a club, or a pub and you’ll find a band playing there. It makes us want to play, want to be there.

Northern Transmissions: Finally, what are your plans for the rest of the year?

BIKE: We hope Danger Mouse calls us for a mega tour [laughs]. We’re doing a European tour. We’re also planning a new album for 2016. We’re not sure if we’re gonna have it ready, but we already started making the songs, and we have more than half recorded – sorry I mean we have the sketches of the final takes. It’s going pretty good, I think we’re gonna finish it this year and maybe launch it at the end of the year, or early 2017.

Northern Transmissions: I’ll be looking forward to it. I just wanted to say it was a great experience to actually talk to you guys. It’s the first time talking with someone from Brazil.

BIKE: Ah it’s also my first time talking with someone from Canada.

Northern Transmissions: And thank you so much for taking the time to do this interview and I wish you the best of luck with everything!