Our Interview with Alex and Noah of Diet Cig 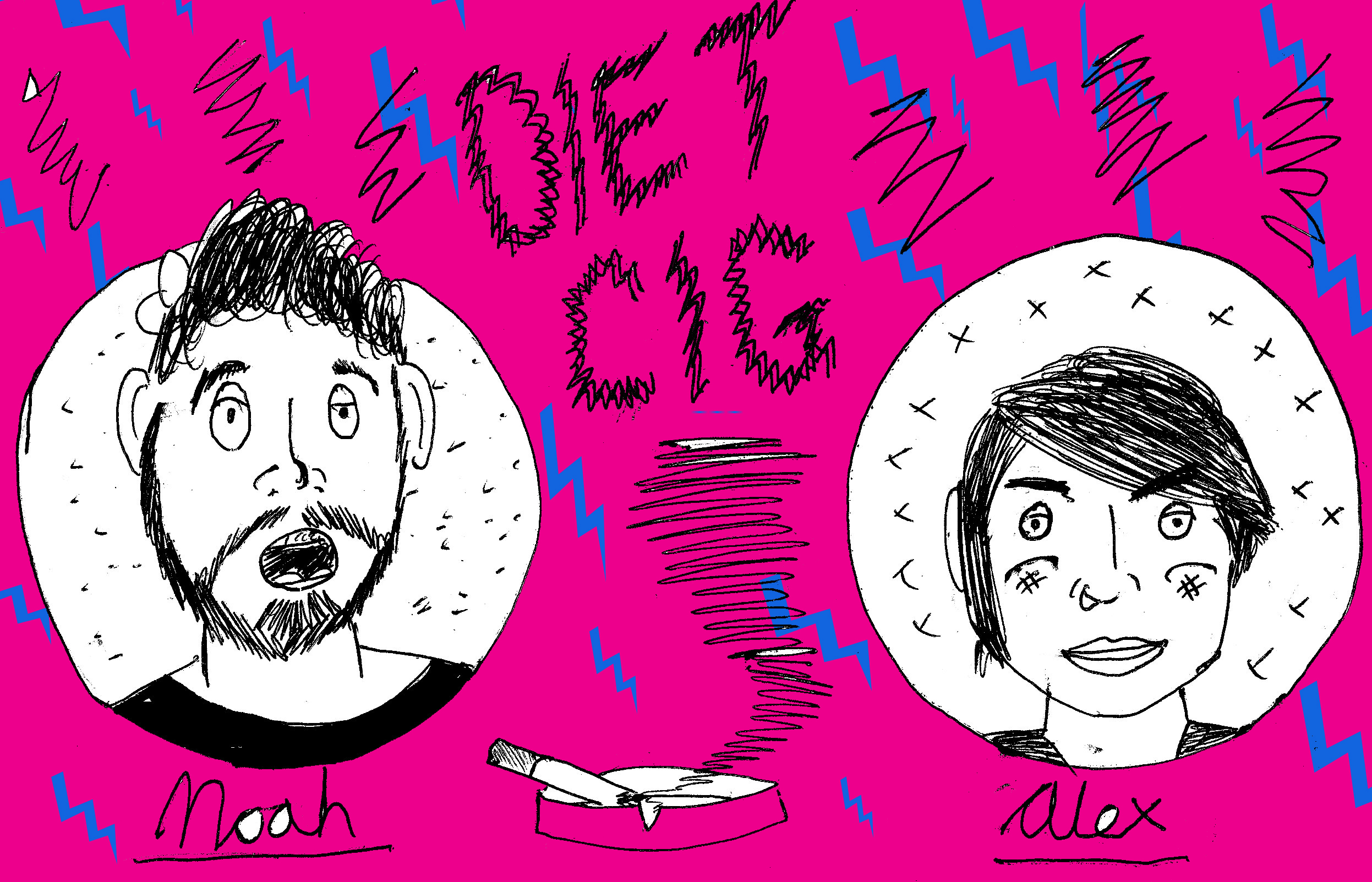 “You’ve got a killer scene there, man.” – Queens of the Stone Age

What’s so great about music scenes anyway? It seems like the as soon as a place has a music scene, people don’t even need to dance around at shows. They just have to stand around and judge the band. Well, Diet Cig are pretty tired of that shit. It’s high time we kicked those pretentious dicks straight out the door and got the party started. Made up of just Alex Luciano (guitar and vocals) and Noah Bowman (drums), Diet Cig are a “slop pop” duo that have managed to hit that tiny little sweet spot where they say the things that you wish that you could say out loud. Their first EP, Over Easy (available here), is a record that simply reeks of honesty; Songs about crappy ex-boyfriends, your first apartment, and yeah, pretentious dicks at shows.

Before they kick off on a 30-day tour that has them playing all over America, we chatted over the phone while they chilled in their publicist’s San Francisco apartment.

NT: So I was wondering what you were doing out west because you guys are an east coast band.

Alex: Yeah, we’re actually on this road trip to Seattle because our tour starts there on September first. We thought it would be fun to take the summer to road trip out to get there and see all the stuff we wouldn’t have time to see on tour.

NT: Well, you have a really big touring schedule lined up, you’re playing pretty much every day in September, is this the first time you’ve ever done something like this?

A: This is our first coast-to-coast state tour. We’ve done smaller, more east coast tours but this is the first time we’ve come to the west coast, or just really past, like, Chicago.

NT: So you guys have some big sightseeing plans?

A: Oh my God, I feel like already we’ve seen so much stuff. We had like a national park week. We went to New Orleans for a couple days. We camped in the desert in New Mexico…

A: We’ve done a lot of cool stuff, we went to an Astros game in Houston… We’ve been all over the place, we’ve done some pretty fun stuff so far. But we didn’t get to see the Grand Canyon yet, which is what I’m gunnin’ for.

NT: Ok, so you’ll get that sometime in September?

A: We actually made specifically a day off in Salt Lake City, so we can check the Grand Canyon out.

NT: So if you’re on vacation right now, what do you do when you’re not? Do you guys have day jobs?

Noah: Yeah, I actually work as a house painter, contractor, construction guy, so I do that during the day. I guess that’s my day job.

A: I used to work in a bakery for the past like, year and a half, but I actually just stopped working there. Right before this summer trip, so I guess right now I don’t have a day job, which is kinda fun because vacation is my life.

N: Well, your day job is a musician now.

A: Yeah. Well hopefully I get another job when I get home. Maybe I’ll be a nanny for someone’s cat. Someone who’s really into their cat, who doesn’t ever want them to be alone.

NT: You could be a cat sitter.

A: Yeah! I’m trying to convince Jessie [the owner of the apartment] that she needs to get a cat sitter, because we’ve been hanging around with her cats since we’ve been here.

NT: What are their names?

NT: That’s awesome. Noah you being a housepainter, is that why I always see pictures of you with paint speckled pants?

N: Yeah, that’s why I have paint on my pants. Actually, I’ve gotten offers so many questions of like, “Oh my god where’d you get those pants?”, or “I’ll pay you $200 for those pants right now”. I’ve yet to have someone actually have the cash in their hand, I’m always kind of like: “if you have the cash, we can make a deal”. But no one ever has the money, and I’m like: “I’m not taking my pants off because you say you want ’em”. All my clothes are covered in paint, I just stopped buying new clothes.

NT: Well, they’re technically always new if you get new paint on them.

NT: So, I’ve been listening to Over Easy. You guys a have a really 90’s twee-pop sound, but there’s also a lot of punk elements that are thrown in there. Considering this is the first band that you’ve played in, was that a sound that you were into growing up? Or did it just come together on its own?

A: Well growing up I definitely listened to like, an embarrassing amount of pop punk. like totally middle-school-emo-girl for sure. I guess I didn’t really expect our music to be that punk-y. When I first wrote the songs they were very quiet acoustic songs, I kind of thought it would be a more chill thing. But then Noah and I decided that if we like to dance around and be stupid at shows then we’d make it for other people that want to dance around and be stupid at shows too. So I feel like that’s the reason our sound became something like that. I definitely think our shows -our live show- is a lot more punk-y and energy ridden than our recording, cause we wanna dance around and we want other people to dance around with us.

NT: So that’s the best way for someone to act at a Diet Cig live show? Just get wild?

NT: You look like you put in a lot of great energy onstage.

A: Yeah, it’s really cathartic because it’s the only time in the world where you just put everything else aside and like, get to be crazy for half an hour…. oh my god cat fight…. Sorry, the cats were beside each other. Well we’re only up there for 30 minutes and I mean, people are paying for us.

NT: Well yeah, you really want to get your money’s worth.

A: I hope we give people their moneys worth; I think we do.

NT: Well I’m satisfied so far. So you guys recorded your first demos in Noah’s parents recording studio? Is that what happened?

A: We did. We didn’t actually release any demos really, because we had two songs up for like a couple weeks before we recorded just to show people that we were trying to get shows from. We were really lucky a good friend of ours, Chris Daly, has a recording studio, Salvation Recording. He was really into just trying to record us, and we got our actual recordings out pretty quick and then we signed with Father/Daughter.

NT: So You have your first record which is great sound unto itself, but do you feel some sense of maturity coming on? There’s a lot of youthful energy in this music and anybody who’s a musician does want to progress at some point. Are you guys gonna grow up, or are you gonna stay loud and young?

A: I feel like it’s not a conscious maturity, I feel like we’re learning to write with each other better. I kinda went into this only knowing a few chords on guitar and I think just personally just learning to become a better guitar player. It definitely makes our new song, “Sleep Talk”. I realize after we put it out that it’s longer than the other songs, it’s structurally a little different, and that made me realize that we’re still learning how to write music with each other. It’s something that still new to us. I think there’s a lot of room for maturity in that sense.

NT: So you find that your writing style’s changing now that you’re a band as opposed to two people coming together.

A: It’s freaky now because now we know that people are listening, yeah. We’re writing a song not to see what happens but actually like to release it, so yeah there’s a change in the mindset.

NT: Yeah, now that you’re writing something to release it as opposed to just on its own.

A: I feel like we try not to think about it, though.

N: No definitely not, you still have to write for yourself and you have to enjoy the songs you’re playing cause you’re gonna have to play ’em a million times. We’re starting to write another record but I guess it’s definitely a lot harder, because we’re touring and playing a lot so it’s hard to get us in a room for more than like, a couple hours sometimes. I don’t feel like I stress to much about writing the new songs and thinking about what people are going to think right away.

A: I feel like it’s a thought and we get into the studio and all those thoughts go away, because we just have so much fun writing together. It’s not like: “Oh my God, do you think this music website is gonna like it?” It’s more like “that riff was fun”, or “that part was cool” or like, “those lyrics are funny”.

NT: Do you ever see yourself adding another member? I think of other duos that bring in other artists to play on a tune.

N: We did a little bit in our first tour with Earl Boykin back in March, just cause we had more players, our friend, Dom, played bass for us at a couple shows because “Why not?”, he knew all the tunes.

A: And he was dreamy, he like, added very good stage presence. He was like the heart throb. We need the guy who’s going to make 15 year old girls and their moms faint.

N: So we had him, which was great, which I enjoyed as a drummer because it adds a little more to the rhythm section. There’s someone else to lock in with, but right now we like doing the two piece.

A: Mostly because our car doesn’t fit three people

N: Well maybe down the line we’ll stretch it out, but right now I think we’ll stick to the two piece. It’s a little bit easier, and different from what I’m used to from being in bands with like four or five people.

A: And we have so many amazing musician friends like, I feel like it’s inevitable that we’re going to collaborate with them. So I definitely see it happening in the future, but for right now it’s just us.

NT: Okay, so before you go, Alex, you play an OCD pedal. How do we get that sweet “Diet Cig” Tone?

NT: Are you guys comin’ up to Canada anytime soon?

A: Um, I think so , maybe in Toronto? We don’t have any plans for it, but hopefully, we have a lot of interest so fingers crossed.

NT: Well, thanks for letting me talk to you guys!

Twee pop duo from not-that-small-town New York, Diet Cig, share their top five picks. Despite the fact it was on the spot, they were able to remember the all consuming-genius of the Space Jam soundtrack and the puberty smashing-glory of Fall Out Boy. Check ’em out below:

Take This To Your Grave – Fallout Boy