Insights and Stories with Patrick Watson 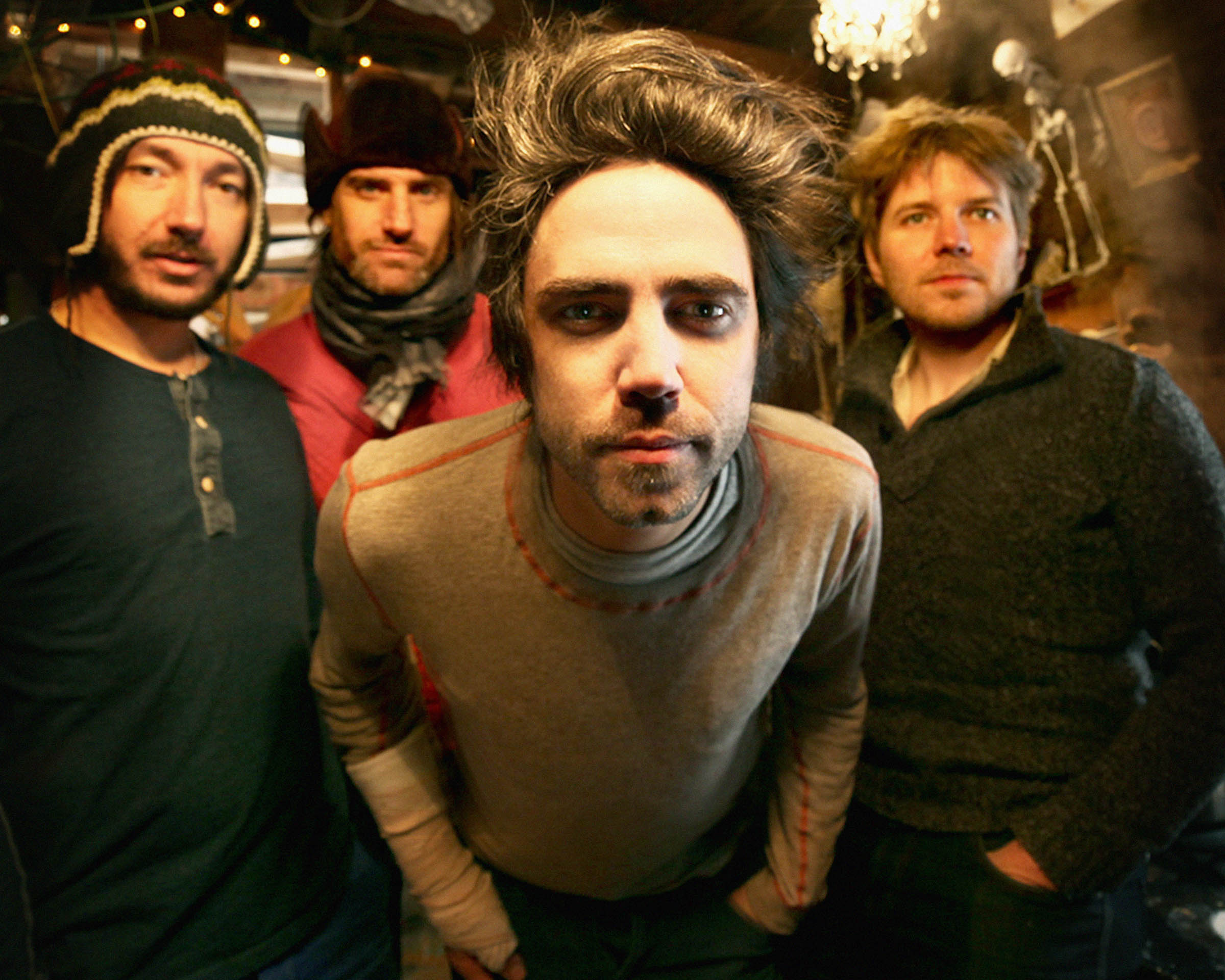 Patrick Watson is now on tour for the band’s 6th record called Love Songs for Robots. While he and his band mates Robbie Kuster, Mishka Stein, Joe Grass were in Edmonton gearing up for their show, we got to give Patrick a call and talk about the band’s recent projects, what it’s like to play with a live orchestra and the simple conversations around music that involve us all the time. Patrick a is quirky but complex character, very passionate about his music and what the band’s music means, it was pleasure to listen to the thoughts and stories of Patrick Watson.

NT: Are you up in Edmonton right now?

NT: You’re at the start of your tour eh?

Patrick: Yeah, we’ve been on tour for like a week now.

NT: Has your tour mainly been in Canada so far?

Patrick: We started in Nashville, when up to Chicago now we’ve been to Winnipeg and now we’re in Edmonton..

NT: Nice gonna do the west coast a bit!

NT: I saw that you recently released a little documentary shot with GoPro playing “Man Under the Sea”

Patrick: Ya, with the orchestra that was a about a years ago. We were doing this concert in Montreal and it’s just a special thing to do in Montreal and something that you can’t do anywhere else because it’s just so obnoxious of a concert. GoPro called and said they wanted to film it. I said sure, so GoPro came and stuck like camera’s on everybody. It was an amazing concert and probably the best concert we’ve ever done so it’s kinda fun that it got to get released. But it doesn’t have much to do with the new record. It’s just GoPro’s initiative.

NT: Yeah, because that song is off you third last album and you played it the first time with the Concert.. boww Orchestra.

NT: So that was pretty cool.

Patrick: Yeah playing with an orchestra is like a huge treat. It’s incredible. When an orchestra plays and it’s good it’s so overwhelmingly gorgeous and so big. When you’re playing on stage it’s always just goosebumps the whole time because you’ve got all these people behind you playing these notes and you’re just, oh my god, It’s awesome!

NT: I can only imagine but even the video was pretty surreal. How did you get the idea to bring the two performance styles together of a small band and orchestra?

Patrick: I’ve been pretty in love with orchestra’s since I was  kid more so than a lot of music so I mean it was more of a dream of mine. If you take just the concept of trying to navigate between the two worlds. Without having the orchestra play just long notes we wanted them to really be inside the band. It’s more a problem sound wise, we kinda just played the acoustic with them and it merged very well so it was pretty awesome!

NT: You’ve been doing a lot of cool projects lately, a little while ago. you filmed the video for places you will go”

NT: Where was that filmed it looks like a little cozy cabin kind of?

Patrick: My friend Maciek who did all of the artwork for this record, he’s kind of a crazy guy in montreal and if you go to his back house or the deck there’s a trap door it’s like a secret door underneath the rug. He calls it his lair, and when you walk downstairs it’s where he makes all his puppets and some crazy stuff it looks like a time warp to the 1800’s. I think it’s probably the most interesting space i’ve ever been into haha underneath someone’s deck. It’s kinda just  this weird little space.

NT: Very cool! In this new record I got quite a big sense of story or narrative in it..

NT: I imagined it can go many ways but I like to think of the album showing this kind of emotional roller through different life events and decisions. Then, in that into the noise song, sorry i’m blanking on the name..

Patrick: “Turn into the Noise”

NT: Ya in “Turn into the Noise” I end up floating around in my own mind wondering about all these sporadic ideas..

NT: Thats cool, you just prefer not to subject a certain story to it?

Patrick: I can, I just don’t know how much. I mean music is kinda strange and the time that you listen to it and where you are in you life and where you are listening to it all become part of what that song means to you more than what it’s supposed to be for me. I mean, I’m actually open to strange stories and stuff like that, so you could take it like a billion ways. When I wrote that song I was recalling on a Sci-fi dream of mine but half of it’s one thing and half of it’s another thing. The dream that I see when I listen to that is weird so I just keep it to myself! (laughs) But the whole end part to that track takes place 15 years from now!

Patrick: Trying to find a comforting and optimistic world I see in the future. That was how the song ended for me.

NT: Beautiful. So are you pretty into sci-fi and science?

Patrick: Not like dragons and shit I more intrigued by what’s realistic, that’s my favourite. I mean I like that sci-fi is a good way of approaching a bit touchy subjects in a world of people that are outside of themselves. You can approach where that starts. I like that about Sci-Fi. I love science though. I like reading everything about science from bioengineering to quantum mechanics I just find it super inspiring.

NT: I guess from a music aspect, in what ways do you intertwine the two? If you do?

Patrick: If its instruments and music and how it works, it’s just feeling right? If you’re feeling something inside of you all you have to do it translate that. That feeling is just about translation. That’s why the album is a bit synthy and electronic. Still very very warm and very live, there’s not much sequences. The whole band wanted to play more electronics without anybody noticing. That would be the goal, we didn’t want to say oh this is an electronic record we wanted the “oh this is music” and in the meantime we just had loads of textures in there that were very electronic.

NT: I get that for sure.

NT: Technology plays a big part in music now for sure

Patrick: Yeah in everything!

NT: So if these are “Love Songs for Robots” do they teach robots ‘how’ to love or are the robots already in love, and that’s why they are listening to this record?

Patrick: Well I don’t really think about robot’s..ever and I almost don’t believe in robots. I predict that when our systematization gets better and better, it’s going to make people think about how much of a robot they are. I think everything we build just makes people wonder if it’s conscious or not and you can’t answer that question unless you know what conscious means. I don’t know what that means. I think all of these advancements we are doing are just going to make humans ask some really fucking weird questions.

That’s the interesting part about it, whether we build something that’s alive or not. It’s more interesting to try and define what alive means to me and everybody is going to have a different answer, none of these answers are right or wrong because you just don’t know the answer to those questions. That’s what the record’s title is about for me.

NT: I guess with a lot of things there is almost a dehumanizing aspect to the materials and artifacts we use everyday..

Patrick: Yea, I’m not like a big preacher, you know I get inspired every couple years and then I make music and the stories become personal when I see them. I don’t know how I have these ideas and I don’t know if people can listen to them on the record any better. Even with us five guys when we are just playing live in the studio, I don’t think any of them think these things but in the end it turns into music, so writings kind of just like that. Thought are thoughts and music is music.

NT: Yeah. How do you guys go about writing songs? Do you start with the lyrics or just jam until something comes?

Patrick: I’m a terrible lyricist, it takes too much but we wrote those songs just playing around one mic. We tried to make it sound good with one mic before we recorded it. That was the sound is strong before we put it through production. The whole album is quite live before recording everything. There’s no overdubs on it or anything so, it made us have to work on the song more instead of just sounds. I’m kinda sick of concepts, everything’s just fucking concepts it’s driving me crazy. It’s like when you watch movies everything’s all cgi it’s not just a cool story but no they put space ships on earth or an explosion. I just have lost patience for that. I want you to tell me a good story. I feel like having all this technology can make people focus on the wrong things.

Patrick: But you know, you see Star Wars and everything is made by hand. Obviously the directors figured out that all these special effects are really boring to watch. When you build all the sets it makes you work on the story, it puts you in a different head space that’s more touching for an audience to watch.

NT: Touching is a good way to describe that. Do you try to make your albums like that or reach a certain emotional level?

Patrick: When we are writing a song we are looking for something that gives us all goosebumps. It could be touching or exciting but if it doesn’t pass that test then we scrap it. That could also mean that three people get goose bumps and one doesn’t, still scrapped. You know what I mean, we are pretty tight on that.

NT: Fair. and you guy have been working together for a long time so you know how each other work!

NT: Wow. Well, last question. What are 5 albums you are inspired by or just listening to right now?

Patrick: I listen to lots of classical music because I’m studying orchestra. Mishka’s the best for this because he bring all the new music in the band. we are in the hunt for interesting r&b and strange hip-hop just to get that in our bones. But ya I listen to that soundtrack and a little bit of everything just to feel a bit from everybody.

Blade Runner Soundtrack– I just found a esper edition. I’m a weird guy so when I really like a record I listen to it a billion times. That Vangelis record was probably the last record that was just a mind blow for me.

I Aubade by Elvis Perkins- I liked it thought it was pretty cool.

Carrie & Lowell Sufjan Stevens I listened to that. It’s quite gorgeous though. It’s very personal and it’s got some pretty risky lyrics in it.I thought it was a pretty gutsy record.

Black Messiah– D’Angelo and the Vanguard