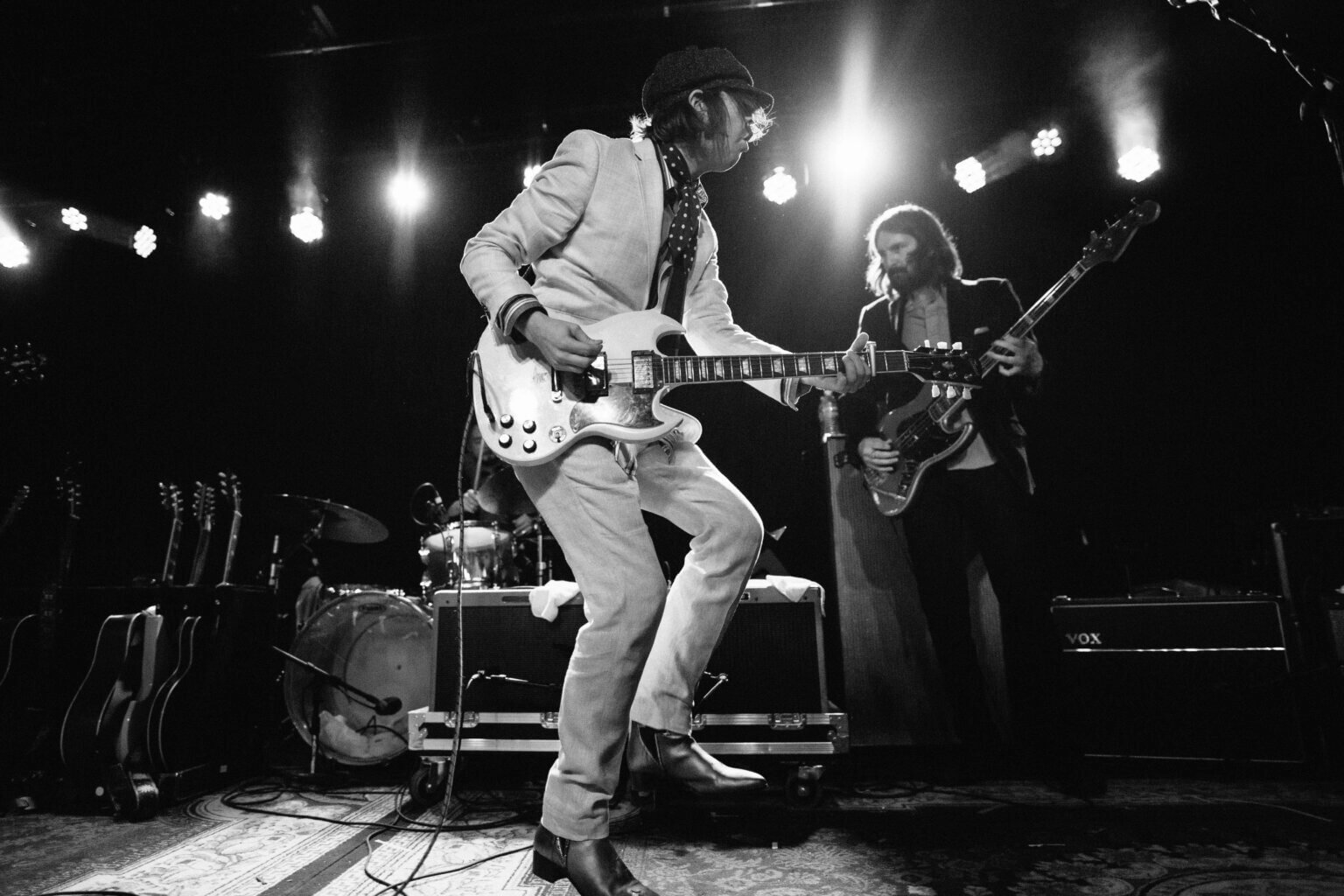 “Being misunderstood is beautiful,” says Aaron Lee Tasjan, as a comment about his forthcoming release that could also just as easily sum up his entire career. The Ohio-bred, Nashville-based singer/songwriter drops his new LP, Tasjan Tasjan Tasjan!, on February 5, via New West Records (Naked Giants, Ron Gallo). The new album, for better or for worse, may define Tasjan’s trajectory in the eyes of his fans, contemporaries and, most importantly, his label. A change in direction is hardly ever neutral, and the same can be said about his unapologetic path. He still looks the same—his appearance can loosely be described as a cross between Elton John (circa 1971) and John Lennon—but his sound has matured and loosened a little bit.

The record’s artwork, which features the 34-year-old clad in a textured vest bearing his surname is unique, slightly eccentric, and intriguing to an unfamiliar eye. If sincerity was the goal, it was achieved. Through slightly humorous and largely anecdotal narratives, he rejects Trumpism, misogyny, racism, and homophobia and hopes, innocently, for a brighter future. He also stresses the importance of self-forgiveness and self-acceptance. On the record’s penultimate song, “Not That Bad,” Tasjan opines, “The world outside my window looks like Nintendo”, which he notes is a comment about the “system being gamed” in his eyes. It’s a pretty explicit sentiment but it certainly fits the narrative he has created. It also matches the environment which the songs were written and recorded in.

The COVID-19 pandemic has brought his active touring schedule to a screeching halt. What was once the hallmark of his late 20s and early 30s, he estimates he’s played about 150 shows annually since 2014—has now become a foreign virtue. Before the pandemic Tasjan’s rigorous life on the road inspired the new tracks. In piecemeal fashion, he’d write a few songs over the course of a two week tour, return to Nashville, record them, and go back out on the road and then write some more tunes that would eventually be recorded once the leg concluded. “It was a great way to do it because I never really laboured over anything. I was just kinda able to let everything be what it was.” That process, however, did not come without its adversity.

After the quiet but assured success of his previous effort, Karma for Cheap, he wanted to create a more stripped back and less wordy set of songs, suggesting to his label that he produce it as well. Having never really produced any of his own music, New West executives were skeptical. “It sucks when you feel like your label doesn’t perceive you as an artist the same way that you do.” Committed to self-produce, he recorded discretely for six months and then sent a handful of songs—“Sunday Women,” “Another Lonely Day,” and “Don’t Overthink It” to the label for review. With an open mind, New West listened to the tracks and liked what they heard. As a result, Tasjan is credited as a co-producer, sharing production duties with Gregory Lattimer (Thin Lizard Dawn, Albert Hammond Jr.).

“They were willing to give it a chance and they decided ultimately that they did like it,” he explains. “It was a process, but it was an actual conversation and everybody said how they really felt.” In addition to taking the reins in production, he also wanted to make a record that would be more straightforward and less open to misinterpretation. Karma, he has said, was assumed to be about the current state of American politics. It’s an assertion he doesn’t outright debunk, but acknowledges was not the album’s narrative intention even though it was written and released during a tumultuous time in American history. In the months before it was released, the United States was grappling with a highly contentious Supreme Court nomination, a summit between the president and a foreign dictator, and a hushed affair between the commander in chief and an adult film star. In reality though, it was intended to be simply about genuine connections and the desire to be understood.

Tasjan believes the record was looked into just a little bit too deeply and was thought to be part of a piece of larger societal commentary. As far as Tasjan Tasjan Tasjan is concerned, he’s taking a far more relaxed approach to the reception of its ideas. “If people don’t see it how I see it, then that doesn’t change my experience with it. In that way, I’m not so concerned about it. It’s meant to be received in the time that anyone’s ready to receive it,” With almost every sentence stippled by a friendly “y’know,” Tasjan speaks with undeniable candour and vulnerability, almost like an introspective student trying to describe the intangible. By his own admission, the pandemic has been difficult for Tasjan, who has admitted to suffering from some hypochondria. With a raging global health crisis wrecking communities and livelihoods, he can hardly be blamed for suffering some anxiety over the past year. Though he seems to embrace emotion, striving to put feelings into words instead of arbitrarily letting them float around untethered.

“We’ve made it almost feel like a liability to be too vulnerable,” he says, speaking to a societal perception of vulnerability equaling weakness. “I have to check in with myself a lot and having people to talk to is important because it allows you to process those emotions and get a perspective in addition to your own.” Like many, Tasjan has very little idea of what is to become of his touring life in 2021. Though he did confirm that shows are in the process of being booked, he remains precariously suspended in ambiguity for the time being.

“A lot of my life has been set into motion by intention,” Tasjan says about his next steps, stressing that hard work needs to remain a cornerstone of his 2021. Tasjan’s songs aren’t just an artificial facade of fake emotional gravity, they are real insights into how his mind operates and perceives the world around him. Now, more than ever, those songs seem prescient and pertinent, and he seems to be the perfectly offbeat vehicle within which those songs can live.