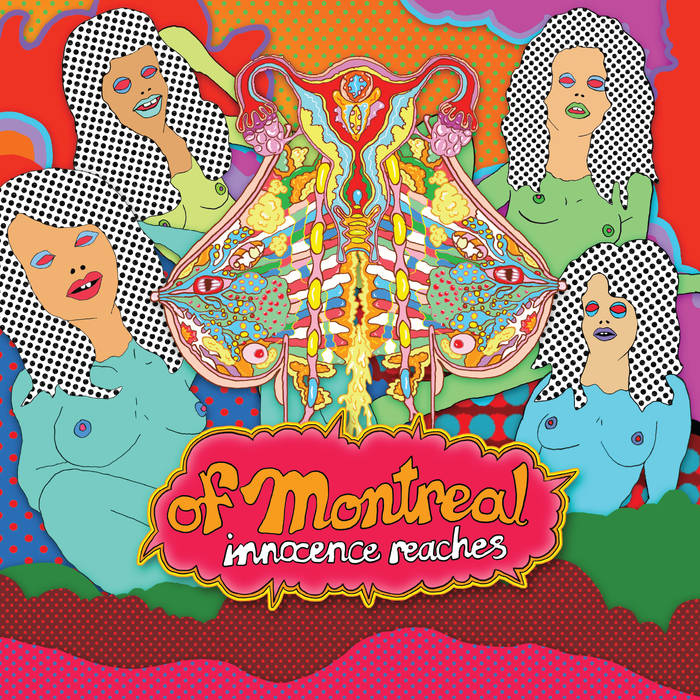 Athens Georgia’s Of Montreal are as prolific as they are unpredictable. With a sonic palette ranging from psych-tinged funk, frenetic synth anthems, 70’s art-punk guitar bangers and more sunny 60’s pop – part of the fun in keeping up with Kevin Barnes and his band is to see which version we’ll get next.

On Innocence Reaches, the band’s 14th L.P, Barnes is on record in saying that he largely left behind the nostalgic influences that have permeated his previous output, ignoring such lifelong musical obsessions as The Beatles and The Beach Boys, for something decidedly more modern. Listening to, and taking elements from bands like Jack Ü, Chairlift, and Arca.

These modern influences, experiments in “low end and sound collage” according to Barnes, are evident right away on the opening track Let’s Relate, sounding like a Crystal Castles cut, complete with underlying throbbing bass and a danceable synth line. The music is not the only modern touch here, however, as Barnes sings about current hot topic – gender identification and relating to one and other, asking us “how do you identify, how do you ID?”.

The second track, and the first single off the album, is likely the focal point. Its Different For Girls is a disco-funk feminist anthem, again a hot social topic. Barnes points out the differences in boys and girls while explaining matter of factly “Its different for girls / from when they are children / they’re depersonalized / aggressively objectified”. Its a thoroughly modern song, and a highlight on the album – also one that traces its sound back to the bands masterpiece, 2007’s Hissing Fauna.

The rest of the album is a mostly positive mixed bag of new sounds, and some older references peaking through. Gratuitous Abysses is a guitar driven bowie-esque rocker, while My Fair Lady is a down tempo beat heavy offering, with Barnes signature dark and wordy lyrics musing about his lady “back at home, cutting herself and sending me photographs”.
Barnes sings numerous times on the album about a nameless self-destructive somebody, detailing their degrading relations and abused psyche.

Deft Pacts uses a spaghetti western guitar line to great effect and is one of the albums standout offerings. Barnes has proven himself over the course of 14 albums to be a wonderfully consistent writer of pop songs, and this album doesn’t stray all too far from that trend. The missteps here come when he fully indulges his new modern influences. A Sport And A Pastime, and Trashed Exes move into full EDM radio pop territory, and though they might win some new young fans over, generally sound like failed experiments in comparison to what Of Montreal have become known for, and known to do very well. Experimentation is commendable and Kevin Barnes has never shied away from diving into a new sound, however these come off as pandering to a trend rather than a natural evolution in songwriting.

Innocence Reaches is one of Of Montreal’s most inspired efforts, overall, since Hissing Fauna and its refreshing to have a band that can still churn out winning efforts 20 years into their careers.