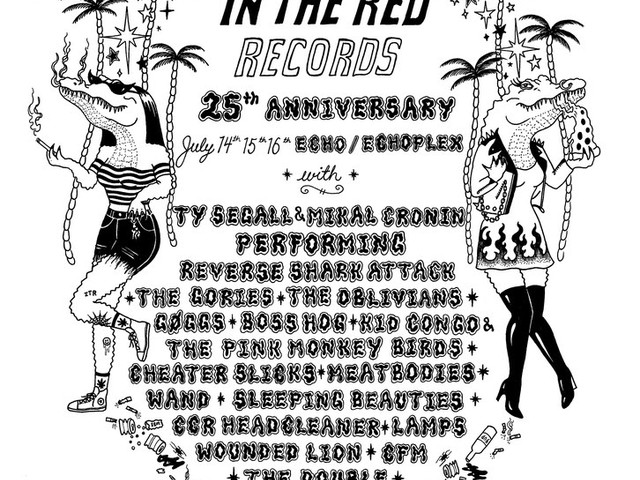 Taking place July 14th through 16th at The Echo and Echoplex in Los Angeles, In The Red Records 25th Anniversary will feature performances from bands spanning the life of the label – with performances from legendary acts and genre pioneers including The Gories, The Oblivians, Boss Hog (with Jon Spencer and Cristina Martinez) and Cheater Slicks, a rare performance of Ty Segall and Mikal Cronin’s 2009 collaboration Reverse Shark Attack, GØGGS’ first live show, bands on the forefront of the current garage rock and psych landscapes including Meatbodies and Wand, and many more.

Presented by The Echo and In The Red, In The Red Records 25th Anniversary has a limited amount of 3-day GA passes ($60) and 3-day VIP passes ($125, includes early entry, drink tokens, In The Red swag) on sale today, Friday April 29th at 10:00am PDT via Ticketfly HERE. Daily lineups, single-day ticket options, and more information TBA.

Founded in Los Angeles in 1991 by Larry Hardy, In The Red has become an institution and purveyor of hard-hitting garage, psych and rock n’ roll. Over the course of it’s 25 years, In The Red has boasted a monumental roster, with celebrated releases from The Gories, Cheater Slicks, Oblivians, The Deadly Snakes, Reigning Sound, Boss Hog, The King Khan & BBQ Show, Kid Congo, Jay Reatard, Vivian Girls, Thee Oh Sees, Ty Segall Band, The Spits, The Fresh & Onlys, Jon Spencer Blues Explosion, Black Lips, Fuzz and many, many more.