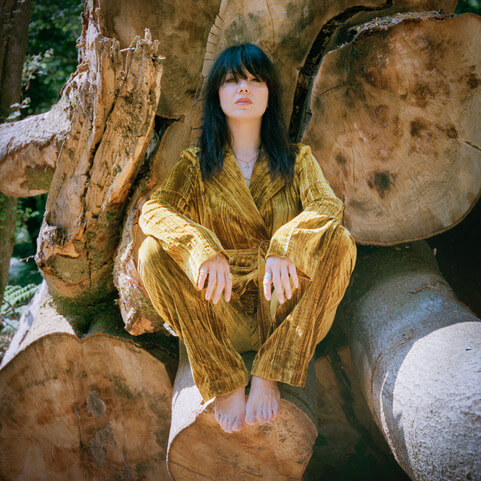 Irish poet and singer-songwriter Imelda May has returned with her sixth studio album and first new music in four years. The new album 11 Past The Hour, finds May dabbling in the world of dirty pop-rock where she has enlisted close friends and musical collaborators Ronnie Wood and Noel Gallagher. Northern Transmissions recently spoke to May about working with rock n’ roll legends, her muse for the album’s cover and what it was like finalizing an album while in lockdown.

Northern Transmissions: I know you and your family were big travellers growing up, so how has this time been for you during a year of no travel?

NT: I saw your performance of “Made To Love” on the Graham Norton show. Was it weird to be back doing the show with all the covid restrictions?

IM: Ouu that’s a great question, because it was really weird! I haven’t performed in well over a year or a year-and-a-half maybe and I’m mostly in comfortable waistbands (sweatpants) and slippers and all of a sudden I’m in heals and a dress and makeup. My head melted I have to admit… you know and its such a positive song and I suppose it’s very important to me so I felt it with all my heart and sang it with every fibre of my being.

NT: Was there an audience?

IM: No, there were empty chairs but the crew, all the filming crew were going for it!

NT: Ronnie Wood plays on that song too. What do you like about collaborating with him?

IM: Oh god, wonderful! He’s so full of life and excitement and passion you know! He has a lot of enthusiasm so I love working with him. I sang on his Chuck Berry album and then we did a short tour of that, I love working with Ronnie we have so much fun, I think the two of us are led by fun for sure! I mean we’re in the music business, you know! He’s great to work with.

NT: This album also sees Ronnie Wood on “Just One Kiss” along with Noel Gallagher. As an artist, what makes a good collaborator for you? Do you have an idea already in your head as to how you want a guest to sound or do you prefer an artist to come in with their own ideas?

IM: Well I always know what I want but of course then you have to be open to suggestions and get it right. There’s always a mutual respect within a studio with whoever you’re working with, whether they’re well known or not, there has to be mutual respect and you have to be ready to make changes. I’m the lyricist so as I was reading it back to them, what I was writing, they were getting a little bit hot under the collar! I sent it to Noel he’s like “Play it to me, let me hear it!” But there’s always a give and a take with everybody.

NT: Was this album written before or during the pandemic?

NT: Is it strange releasing music that is from a year or two ago?

IM: I mixed them after lockdown because I co-produced this album like I do every album. So normally you get into the studio and you’d have everything that you’ve recorded over a period of time, you really roll up your sleeves and delve into it. During lockdown it was totally different! It was emails back and forth, that took ages… but it was worth taking the time, it’s always worth taking the time to do it right. But definitely, some of the songs were written after, certainly finished afterwards.

NT: I think in music and film and television, a lot of people are using covid as inspiration recently, so it’s nice for that not to be an obvious theme of the record.

IM: We need positivity! I think it’s a predominantly positive album and “11 Past The Hour” itself that song, is about being wrapped up and wanting to be held and told everything’s going to be alright. I think for me, I’m glad that’s what my album is about.

NT: I really enjoyed “11 Past The Hour” and I’m hearing a lot of desert rock influences in there, maybe some Spaghetti Western influence. So how did that song come about and what did you want for the guitars on that song?

IM: Oh thank you, thanks so much! That was one of the early songs that I wrote, “Breathe” was the first song I wrote off the album and I think “11 Past The Hour” was soon after. I wrote that because I started to see the number 11:11 everywhere and I didn’t know what was going on. Every time I looked at the clock or train the number was 11:11 jumping out at me and I was curious and I researched it and apparently it’s call. Whether it’s spiritual or the Earth or whatever – its a call for reawakening! It was from so many ancient traditions including old Irish pre-Christian paganism…. I’m still actually right in the middle of it and I was so glad that it opened the doorway for me to write “11 Past The Hour.”

NT: Let’s talk about the album cover because I know it was was inspired by Pattie Boyd, seeing as she’s one of the greatest musical muses of all time, why did you decide to use her as inspiration for the cover?

IM: Oh thanks! God I’m delighted you picked up on that! I was invited to sing at a thing the two of us ended up on, this event together in Switzerland and it was just a great day and we bonded. We had lunch together and we got on so well! I’ve been a fan of her’s for quite a long time and as you know she’s always been a muse, she’s always been a model, she’s known as being “the wife of” George Harrison or “the wife of” Eric Clapton. But people often forget, and it drives me crazy, that so many of the images we know of The Beatles or Eric Clapton, so many are her images! She never gets the credit that she deserves for being such a fucking brilliant photographer, her images are just phenomenal!

She gave me one of her books and signed it to me and I just loved the image of her self portrait which I’ve always loved. I asked for her blessing before putting it out and I said “I hope you’re okay with this, do I have your blessing?” and she was like “Absolutely, I’m so delighted!” she’s just such a great woman.

This interview has been condensed and edited for publication purposes