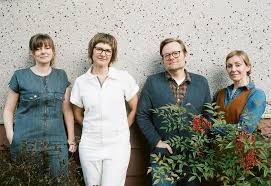 It’s an ending like a beginning. “We were trying to pretend it was our first record.” This is their final record, Frog Eyes’ last gasp—but the art-rockers wanted to capture the energy of a debut, the freedom you feel “when there’s no expectation that anyone will actually listen.” They made it at home, burrowing under the house where Mercer lives with drummer Melanie Campbell. The goal was to blot out the world, focusing on what they could grow down there, four musicians in a basement. Could they squeeze out ten songs? Was there enough paste in the tube to squeeze out 10? “In the end there was. Which is rad.”

No guests, no engineers. A self-invention. Violet Psalms began with its frantic, reverb-drenched guitar, squiggling over a modulation pedal. Next Mercer and Campbell concocted the drum parts—imagining them as onomatopoeia then recording them in fragments, kickdrum by kickdrum, tom by tom, with tailored effects. “The goal was to disorientate,” Mercer explains, but also to work by instinct, gut—a cut-up of music and image, songs that coil back and kiss. The band pruned as they went, adding Terri Upton’s bass parts, taking other parts away. Whereas past LPs used piano, Shyla Seller worked with shimmering synths—chords like bleeding watercolour, shadows casting on a wall.

*With Hello Blue Roses
$With Skygreen Leopards
#With Zachary Cale