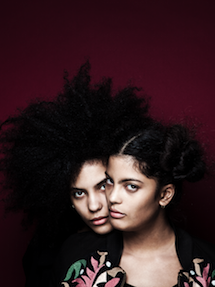 Ibeyi today announce details of their first North American tour which kicks off this March with an apperance at this year’s SXSW in March. Last November the twins played shows at Joe’s Pub in NYC and Hotel Cafe in Los Angeles and capitvated fans with unique blend of modern pop, hip-hop, electronic and traditional sounds and chants from their Yoruban heritage. Watch the girls performing live their singles “Mama Says” on Jools Holland and “River” at Les Inrocks.

Following their trip to Austin the girls will head to the east coast to officially kick off their tour in Washington D.C. on March 23. The 11 date run will also see the girls visiting Chicago, Minneapolis, Seattle, San Francisco and returning to NYC and Los Angeles. (Full list of dates below).
Ibeyi are 19 year old French Cuban twins, Naomi and Lisa-Kaindé Díaz. They are daughters of the late Cuban percussion Anga Díaz. Naomi plays percussive instruments, the Cajon and the Batas, while Lisa plays piano. Together the twins combine modern pop, hip-hop and electronic influences with the traditional sounds of their father’s Yorùbán culture.