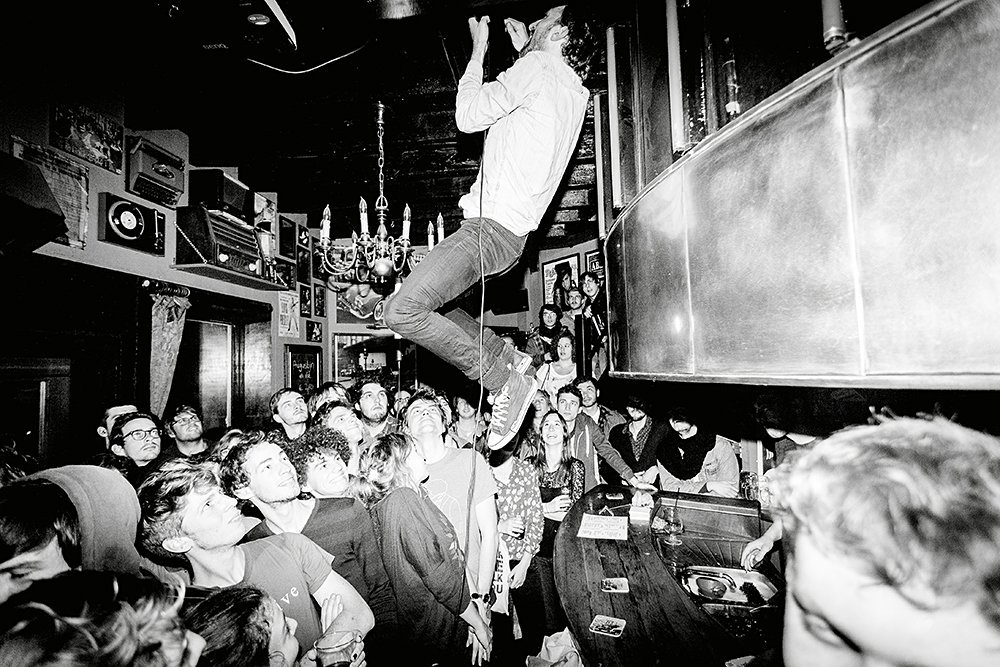 Hailing from Ghent, Belgium Hypochristmutreefuzz are at the forefront of Ghent’s noise-rock scene. Other than a secret weapon for passionate Scrabble-fanatics (their name comes from an avant-garde jazz piece by Misha Mengelberg) the band, formed around Belgian musician Ramses Van den Eede, is a frontal attack to all of the senses, thanks to a crushing groove, the use of a power drill as an instrument and inconveniently lovable bone-shattering and shamanic vocals. Following on from a number of single releases and an EP release in early 2015, they are now ready to release their debut album Hypopotomonstrosesquipedaliophobia (named after the phobia of long words, of course!).

The album is a collection of ten frenetic, fuzz-driven, unhinged and at times seemingly depraved tracks. However, whilst wild and undeniably distinctive Hypochristmutreefuzz understand that a song being intelligent and complex need not exclude it from having a raw, rhythmic energy and a strong sense of melody, conjuring up imagery of a pop-infused satanic ritual. This translates into their live shows, performing in total darkness with one strobe light per artist and Ramses Van den Eede frantically thrashing and gyrating around the room amongst the audience members. Their bizarre and almost ceremonial live performance is enough to get even the most unassuming and inhibited members of the audience moving.

The band have played one-off gigs all over, from historic underground castle vaults in Southampton, through to the likes of Live at Leeds and Glimps Festival. Following their album’s release in August, the band are set to return to the UK with dates to be announced. If you’re lucky enough to have heard Hypochristmutreefuzz or have even seen them live before, and believe us, you’d know if you had, then this incredibly strong debut effort should be instantly recognisable as a consummate and direct snapshot of the devastatingly efficient unit; with instruments, ideas and personalities bouncing off each other in an audible culture of creativity. If you’re still yet to hear them, then now is your chance. Throw up your arms. Join the cult. Hypochristmutreefuzz is: -Elias Devoldere (drums) -Jesse Maes (guitar) -Thijs Troch (synth) -Sander Verstraete (bass) -Ramses Van den Eede (guitar, vocals)