Hundred Waters Live In Vancouver, BC 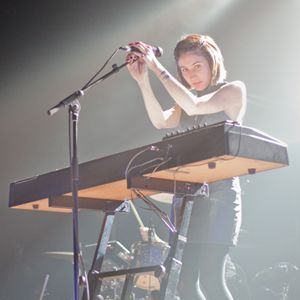 Digital folk as a genre in itself is somewhat of an anomaly. Sewing the worlds of synth beats with that of flutes, acoustic guitars and searing harmonies appears an unachievable feat. Like bringing glowsticks and incense to the same party and trying to make it work.

Watching Hundred Waters’ recent Vancouver performance, it became clear that when you hit the right combination of musical talent nothing is impossible – even, as it is often labeled, folktronica.

Having cut their teeth in larger venues supporting Britian’s hottest export, Alt J earlier this year, Hundred Waters were then invited to join the masters of skeletal beats and stark melodies, the xx on their most recent tour. This included a stop in the most impressive Queen Elizabeth Theatre in Vancouver.  Both bands were on route to play Sasquatch Music Festival, and you could not help but feel that they were holding back a little, putting some energy in reserve for the mass audience at the Gorge.

Saying that, when your talent is as stellar as that of Hundred Waters, holding back a little still offers a stellar show. The five-piece band from Florida is comprised of singer, flautist and pianist Nicole Miglis, multi-instrumentalist and programmers Paul Giese and Trayer Tryon, harmony vocalist and percussionist Sam Moss, and drummer Zach Tetreault. Each and every one of them is an exceptionally talented musician and this was increasingly apparent watching them play together on stage.

The quintet offered a 7-piece-set composed predominantly of songs from their self-titled debut. Now there is no doubt about it, the crowd was there to see the xx. But Hundred Waters captured the attention of the half-packed theatre and dare I say, captivated them by the crescendo – a haunting performance of Are/Or – electronic instrumentation with minimal lyrics.  This, unfortunately, was their second last song of the night. I couldn’t help but feel that had it been delivered earlier in their set, they would have had the entire audience eating out of the palm of their hand for the duration of the show.

Saying that, the dreamy sounds of Hundred Waters served as a satisfying après to the xx. I counted four highlights and then realized they played a mere seven songs. Thistle, from their first EP of the same name was remixed by Star Slinger – a UK DJ/ Producer who shot to fame as critics’ darling in 2011 combining broken beats and Motown melodies. The band learned to play this remix live and it proved a crowd pleaser. The haunting lyrics of Gather “We are twisted from fibers… And we will wind ourselves till…” showed a quiet elegance and Miglis’ vocals were nothing short of breathtaking.

Hundred Waters has garnered respect amongst their peers. If they continue to perform to this level, the combination of their enchanting sounds and serious talent will see them emerge in level playing field.  I have no doubt that this day is coming. Soon.

All photos by Jackie Dives