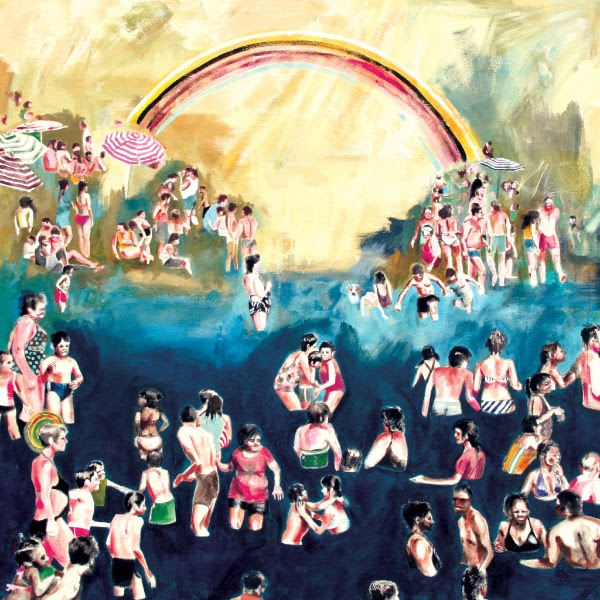 While no less a gamble than starting any other business on your own, dedicating your life to becoming a successful career musician is no sure thing. That said, Montreal’s the Luyas have had a decent go of it so far. After having released a handful of albums and toured the world over the last ten years, three quarters of the band are “self-sufficient” off their music (singer/guitarist Jesse Stein also works in the sciences). On the other hand, “Self-Unemployed,” a hypnotic groove pulled from the act’s new Human Voicing LP, paints a bleaker picture for those scrambling to make ends meet: “when you don’t make money, you don’t make hope.”

Perhaps the lesson here is to keep swingin’, no matter what. Just like Stein’s in-song visual of “hot piss in the air” waiting to land, there was an uncertainty as to how the improv-heavy recording sessions for Human Voicing would turn out when the band first hit the studio. Thankfully, Human Voicing is a rewarding listen.

While Human Voicing is the first full-length release from the Luyas since 2012’s Animator, it follows last fall’s five-song Says You EP. This latest, eight-song release was tracked at the same time with producer/Besnard Lakes member Jace Lasek, and both have the band sounding especially free. But while the quartet have gradually smoothed out some of the more explicitly frantic, polyrhythmic edges of their older work (see the title track to 2011’s Too Beautiful to Work), there’s still plenty of complexity to this looser version of the Luyas.

With the aforementioned “Self-Unemployed,” drummer Mark Wheaton lays down a heavy, Can-like groove, which bustles beneath random snatches of guitar and an assortment of distorted dial tones and electronic alerts. “Beating Bowser” may or may not be about laying it all on the line for the good people of the Mushroom Kingdom, but it most certainly finds the band juxtaposing mauve horizons of sound against a tense, ticking beat.

Mellower treasure includes “All of Everything,” where Stein analyzes planetary alignments above Spaghetti Western-inspired guitars and oscillated digi-percussion. A backup vocal arrives pitch-shifted and alien-like. The excellent “Dream of Love” twists together quiet storm synths and a romantic swirl of violins beneath Stein’s breathy performance, this all conjuring the similar soundscaping of the Luyas’ onetime split 7-inch partners, Twin Sister.

Arguably driving home the Luyas’ newfound approach the most is closer “Never Before,” another expansive groove that includes a melodically-delivered, if quixotic mission statement: “just make up the meaning.” But while the Luyas’ direction has become more open-ended than ever, the improv angle ultimately works because of the foursome’s rock-solid musicianship.

“We’ve been in this band for 10 years,” Stein said last fall, in a press release tied to Says You, “and like a marriage or anything that lasts long it’s Swiss cheese and full of holes and delicious in between, and excellent on toast.” In other words, it’s time to eat up Human Voicing.