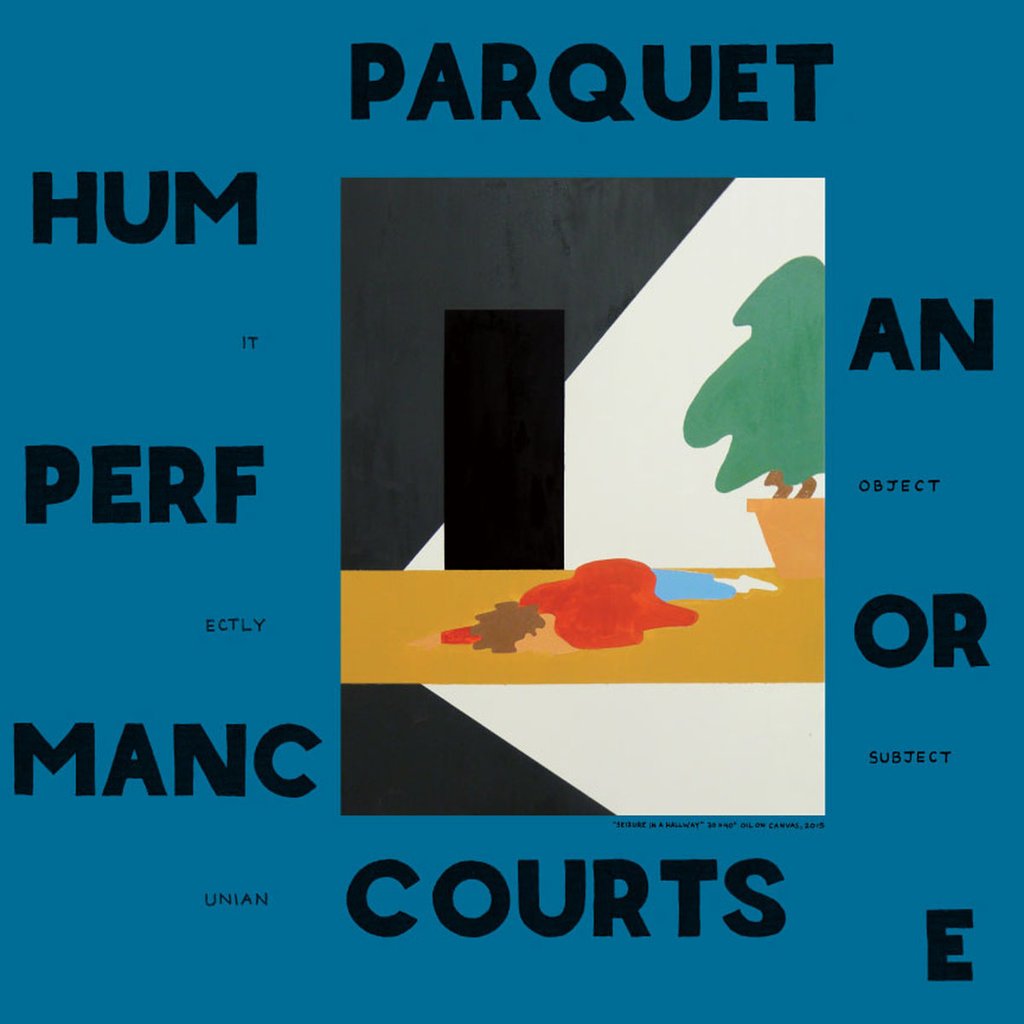 After watching Parquet Courts play a show in Toronto, I ended up running into Andrew Savage outside the venue.

“Hey, man you’ve got an album coming out soon right?”

And promise they have. Some critics made the comment that Monastic Living was really the band needing to get all those weird (and at times unlistenable) sounds out of their systems. Maybe it was to prove to themselves that they could make something truly experimental, maybe they were songs that they felt needed to be in the public discography of Parquet Courts, something beyond a bunch of demos confined to a hard drive. Whatever the reason, it’s clear that Human Performance would not sound the way it would without the cathartic Monastic Living.

Though many fans of the band were upset by the wacked-out experimental EP/Album, they should definitely be satisfied with Human Performance. Parquet Courts have been a band that have managed to perfectly summarize the existential angst that goes hand-in-hand with modern life. With a pretty strong batting average with Light Up Gold, Sunbathing Animal and Content Nausea; Human Performance stands out as another strong addition to the band’s discography.

The album starts with the single, “Dust”, a song rooted in a fear of decay. It fades out to the sound of inner-city traffic, car horns that become clearer as the music fades out. The same anxiety they’ve spoken of on Content Nauseau’s “Everyday It Starts” comes back here, only now the anxiety has been articulated into one based out of a fear of stagnation, something the band is no stranger to. Though the content is thematically similar, never before have they hit such a strong stride in writing pop-songs.

“Berlin Got Blurry” has the band getting into some surf-style twang, very reminiscent of Shadowy Men on a Shadowy Planet. Most of the guitar solos on the record are far from the vein of “Sunbathing Animal” or “Stoned and Starving”. There’s a structure present, loose, but present nonetheless. This is especially apparent on “Steady On My Mind”, which has a melody like something out of the Irving Berlin songbook. The final track (for the physical copy), “It’s Gonna Happen”, has Savage doing his very best Leonard Cohen impression; telling a suitor that even though things can feel staged and faked, he is most definitely “not an imposter”. That’s not to say there’s no weirdness in Human Performance: the atonal melody and jarring rhythm of “I Was Just Here” shows how the band hasn’t let their no-wave side go. The beat poet-ish, “One Man, No City” even has hand drums in its rhythm as well as a long, free-form guitar solo.

Savage says the title refers to a moment of angst where he couldn’t tell if his humanity was sincere or a performance, but there’s another comparison to be made. Even ”Pathos Praire” refers to “how we are wired” to “hide ourselves in vain” despite our deeper emotions. Human Performance, is an album made by a band that is getting older, maturing. The performance of our humanity is being taken into another act, one of adulthood. Emotions and sincerity don’t always read as the best course of action, and sometimes it feels better to choose “phantom affection” when you’re trying to act like a grown up. We don’t always like doing it, but it comes with the job. Sometimes things get rough, but other times, life will leave you grateful for the experience. In the case of Human Performance things have gone very, very right.