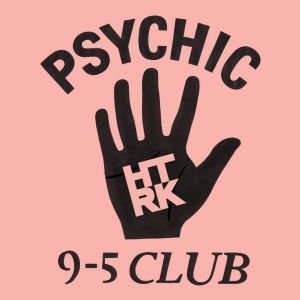 Psychic 9-5 Club marks the beginning of a new chapter for HTRK. It’s an album that looks back on a time of sadness and struggle, and within that struggle they find hope and humour and love. It’s Jonnine Standish and Nigel Yang’s first album recorded entirely as a duo—former band member Sean Stewart died halfway through the recording of their last LP, 2011’s Work (Work Work).

Though the record is recognisable as HTRK—Standish’s vocal delivery remains central to the band’s sound, while the productions are typically lean and dubby—they’ve found ample room for exploration within this framework. Gone are the reverb-soaked guitar explorations of 2009’s Marry Me Tonight and the fuzzy growls that ran through Work (Work Work). They’ve been replaced with something tender, velvety and polished. This is HTRK, but the flesh has been stripped from their sound, throwing the focus on naked arrangements and minimalist sound design.

The album was recorded at Blazer Sound Studios in New Mexico with Excepter’s Nathan Corbin, who had previously directed the video clip for Work (Work Work) cut “Bendin.” Inviting a third party into their world was no easy decision, but in Corbin they found a kindred spirit. The LP was then refined and reworked in Australia at the turn of 2013, before the finishing touches were applied in New York during the summer.