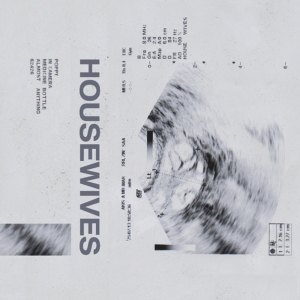 Faux Discx has announced the debut self-titled release from Housewives: an experimental guitar-band based in South London, interested in the relationship between noise and sound. Recorded by Vision Fortune’s Alex Peru, Housewives is released on December 9th on limited edition tape cassette and digital download. Listen to ‘Medicine Bottle’ above.

Housewives’ sound (or noise) is indebted to the scratch and scrawl of No Wave and Post Punk. Melody is often tossed aside in favour of clanging dissonance and sharp rhythmic turns. This Heat’s Charles Hayward noted ‘a sort of monochromatic surliness slowly warms up to a barely controlled anger, hypnotic and building from the simplest elements’ in Housewives’ sound. The influence of the likes of Luigi Russolo, Steve Reich and Phillip Glass can also be found within the space and noise of the group’s DNA. Upset The Rhythm put it best: ‘their songs creep out of chaos into urgent bursts of energy and loud focus.’