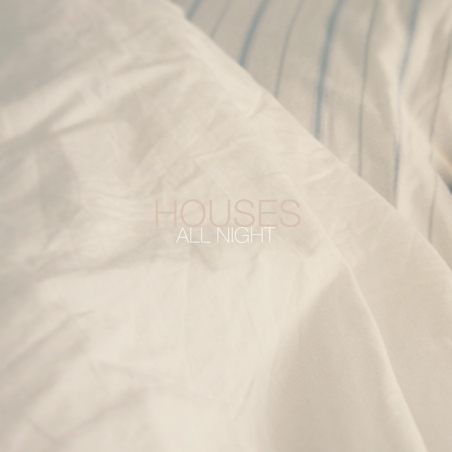 Recorded over the past year, splitting time between their new home of Los Angeles and Sonic Ranch ( Animal Collective, Beach House, At the Drive In, Yeah Yeah Yeah’s), the bliss-duo Houses are set to release sophomore album A Quiet Darkness on April 16th via Downtown Records.  The narrative of the album tells the story of a husband and wife separated in the midst of a nuclear disaster and their attempt to reunite with one another along the Highway 10 in California before their inevitable deaths, each song taking place in different abandoned houses along the way.  Real life couple Dexter Tortoriello (also of Dawn Golden and the Rosy Cross) and Megan Messina made the trek themselves multiple times, to record sound and video at these abandoned houses that are featured on the album.  The album’s celestial ambiance and wanderlust concepts are conveyed throughout the recording with techniques employed by Dexter Tortoriello’s production and the stark contrast between the minimal electronic pulses, found sounds and meandering and melancholy harmonies.  The ethereal sound on which Houses was built is woven through A Quiet Darkness, the 2013 release shows a deep and pensive side to a band who clearly encompass a darker side of bliss; a bold new bravado that will resonate with anyone who has ever experienced love and loss.  Look for Houses to preview some of A Quiet Darkness at this years SXSW and check out some additional tour dates below.