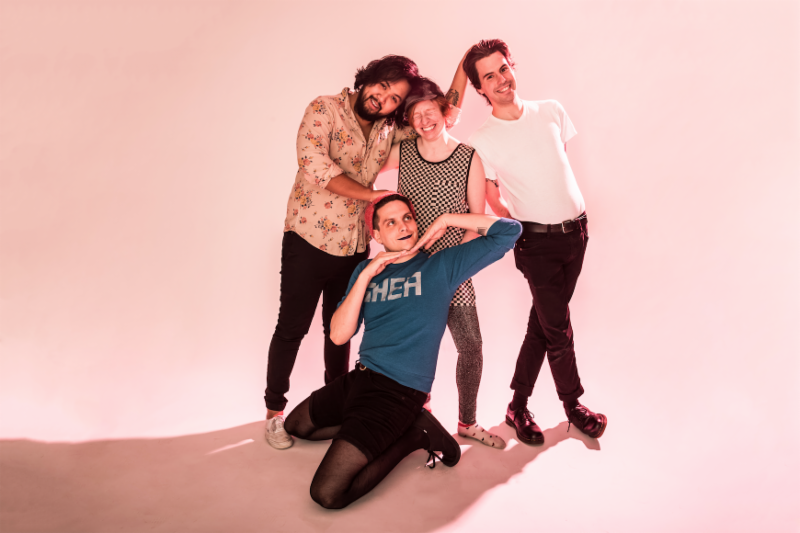 Fits have shared the album stream for their upcoming debut, All Belief is Paradise. Stereogum, who premiered the stream are saying it’s “poignant power-pop… Nicholas Cummins unpacks grief and circumstance with good-natured humor and naked vulnerability.

After years of playing bass in multiple bands across the Brooklyn music scene, Nicholas Cummins (they/them) is releasing All Belief is Paradise, the debut full-length for their first songwriting effort, Fits. Songs that began as vocal and bass loops recorded to voice memo as a way for Cummins to express their own desires and songwriting designs, have evolved into effusive power-pop songs with the help of close pals drummer Brian Orante, and later Joe Galarraga (Big Ups) on guitar and Emma Witmer (gobbinjr) on bass. All Belief is Paradise, named after a line in a Lisa Robertson’s The Weather, honors the spirit of the early material (sometimes directly pulling in bits of early voice memo demos) while unveiling Fits’ evolution into a fully formed band capable of being thoughtful and bratty, accessible and weird, and tackling it all with confidence, humor, and great hooks.

When their mother died three years ago, Cummins was left reevaluating the degree to which they had been holding back various identities and emotions in order to protect her. Fits was born as a way of claiming that space. The phrase “I want” is hyper-prevalent throughout the album – while writing songs for the album Cummins would often start by yelling “I want-” and going from there. Much of the record is about grief, and “returning to a busted up fucked up childhood after falling out of it and stabilizing yourself on your own,” says Cummins. “The Ground” and “Drop Thistle” were written after visiting the site of their old childhood home in New Freedom, Pennsylvania (profiled as “Trump County” in PA Magazine). Still other songs are drawn from lighter fare: ghosting, a relationship that was already “dead” and is now “Superdead.” Even the darker content is often folded into effusive material, buoyed by yelps, shreds, and cathartic breakdowns.