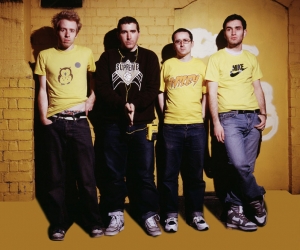 Dark & Stormy is the first new Hot Chip recording since their album, In Our Heads. The track was recorded at Club Ralph in London and features Charles Hayward from This Heat / About Group on drums. Dark & Stormy will be available on 10” (RUG537T) and as a Digital bundle (RUG537D) on 22nd July 2013. Listen to Dark & Stormy, HERE.

The single will also feature a new collaborative version of In Our Heads’ album track Look At Where We Are, featuring Tori and Reiko Kudo from the legendary Japanese folk-psych collective, Maher Shalal Hash Baz, who have sung the track in Japanese.

Artwork for the single comes once again from artist and long-term Hot Chip collaborator Nick Relph.

Hot Chip play their only UK show this year before Kraftwerk at Latitude Festival on July 20th. The band has been on the road since the release of In Our Heads last year playing  shows at Lovebox, Camp Bestival, Brixton Academy, the Hollywood Bowl in Los Angeles, Prospect Park and Roseland Ballroom in New York and most recently Primavera Sound in Barcelona as well as on the main stage at Coachella Festival in California.