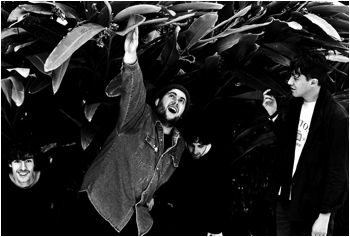 Hooton Tennis Club have announced details of the release of their debut album. Highest Point In Cliff Town will be released on Friday 28th August 2015 on Heavenly Recordings. The album was recorded and produced at Parr Street Studios in Liverpool by Bill Ryder Jones.

From Chester and Ellesmere Port, their name inspired by a sign for the tennis club in Little Sutton, Hooton Tennis Club grew up together and played in a number of bands with improbable names. While studying at various colleges they speedily recorded some songs to upload with no intention of ever being an actual “band” but early demos soon caught the ears of Heavenly Recordings and by September 2014 the band had signed to the label.

Following a UK tour with label-mate H. Hawkline the band entered the studio to start recording their debut album in the early spring of 2015. Inspired by the plug-in-and-play quasi-improvisational approach of Deerhunter and Ariel Pink.

The band have also revealed the video to their forthcoming single, Kathleen Sat On The Arm Of Her Favourite Chair. The video, shot and directed by the band, features live footage taken at their appearance at the Heavenly 25th weekend at Hebden Bridge in January of this year intercut with them larking about on tour. 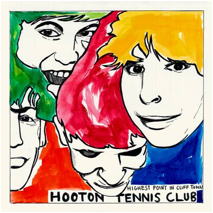 Track Listing
1. Up In The Air
2. I’m Not Going Roses Again
3. P.O.W.E.R.F.U.L. P.I.E.R.R.E.
4. Something Much Quicker Than Anyone But Jennifer Could Ever Imagine
5. Jasper
6. Always Coming Back 2 You
7. Barlow Terrace
8. Spokes
9. Kathleen Sat On The Arm Of her Favourite Chair
10. Standing Knees
11. And Then Camilla Drew Fourteen Dots On Her Knees
12. Fall In Luv

The band have announced a run of U.K dates in the summer with King Gizzard & the Lizard Wizard and are confirmed to play a number of UK festivals over the summer.