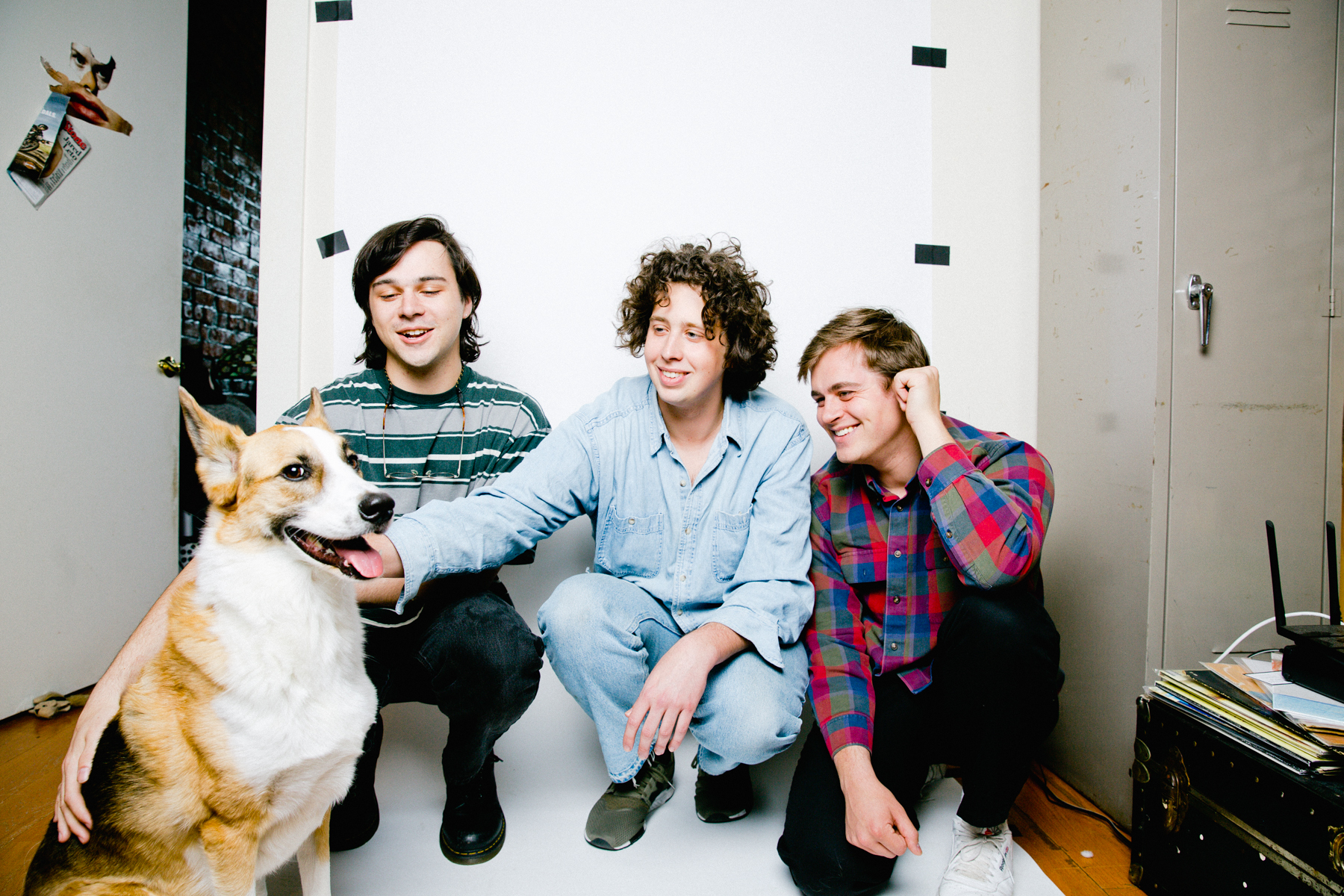 Hoops are one of those bands that will definitely surprise by how strong they are on their first LP Routines. After years of playing together in different projects they came together and found something uniquely driving in working together. We talked to member Keagan Beresford about comfort from working with friends, evolving in the studio and life on the road.

Northern Transmissions: You’ve talked about wanting to mix things up from your previous releases, how did you go about it?

Keagan Beresford: It’s true we wanted to but we weren’t redefining our entire sound. It’s something that happened on a weekend when we were hanging out together because all of us were in school at the time. We wanted to take time to make sure all of the songs were sequenced and structured in a way that made sense and we wanted to make sure the textures were all working for each other. We added a lot more moving parts, more instruments more sounds. Tried to write the songs a little better, thinking about our subject matter because we hadn’t done that much in the past. We didn’t do a complete overhaul but we just tried to make it more developed, since it does still sound like the EP.

NT: Your record sounds so finessed and fleshed out both technically and sound-wise, have you guys been kicking these tracks and the band around for a lot longer than people would suspect or is it more just a culmination of playing together for so many years in separate groups?

KB: It was a bit of both. On the full length it was a mix of older songs and songs that were written in the last few months. It seems to happen a lot with bands’ first releases. Some of the songs were two or even three years old and had been on previous tape. It was songs we’d taken a lot of time to think about and we knew what we wanted to do with them. We wanted to try harder to make better versions of them. We would demo new songs and demo them with the band to decide what we wanted to do but both came out the same way. A lot of work being done while recording to flesh out the simple demo recordings.

NT: Have you found going back to flesh out these songs that they feel a lot fresher than they did the first time?

KB: I think so. Especially with “All My Life” Drew wrote this song for the third cassette and we all really dug it. But when we went to the studio to do a real version of it, we knew we wanted to do it for the full length because we knew that as much as we loved it, we knew it could be more expressive and we could do more with the textures. The new version makes me more excited to listen to it, especially more than once.

NT: What made you decide it was finally time for a full fledged release?

KB: We had tossed the around the idea of making a full length. A couple years ago we made a bunch of demos we thought of making a full length but nothing really came of it. The idea of doing a proper full length didn’t really come about until we signed with Fat Possum since it was part of our contractual stipulation with them. It was something we really wanted to do though but didn’t have the time or the means to but lo and behold someone comes in and wants to pay us to do it, it made it more real of an idea.

NT: Considering you had all played together in separate projects for so long, what finally made this project come together and what made it feel like something you wanted to stick with?

KB: For this project in particular. When we got together back in 2014, all of us had been playing together forever and can predict each others’ musical tendencies. For me personally it felt like cream of the crop. Each member is the best that I know. We all listen to the same stuff and are on the same creative wavelengths so it feels super natural.

NT: Do you think the ease that you guys have from working together has made the music not just easier to make but more honest and organic?

KB: I think so. Because when we were working on it we did all the demos on our own. When we were working together though we’d hit brick walls or get critiques back from our A&R guy at the label pointing out things to emphasize or ideas they had, and we’d collectively say “No” because we’re all on the same page. We know when we’re being genuine, and not doing what other people want to do, we back each other up, and we’re all in this together.

NT: How have you found headlining and touring with the upswing of your critical following and praise?

KB: We’ve headlined toured in the past but that was just to play cities we hadn’t played before. For this tour though, we got to the UK 10 days ago, getting over here, and playing places we had never been, the ups and downs really come from figuring out how the show is sounding, how we’re all feeling. It mostly comes from making sure we can what we do well, with audiences it’s just hit or miss depending on where you’re playing. We’ve toured a lot so we’re accustomed to the unpredictability of it all.

NT: What did you guys love most about working with Jarvis Taveniere and what was the most interesting thing he brought to the record?

KB: Jarvis mostly just engineered for us. He did Sunflower Bean’s record and the label wanted him to work with us after the results from that record so we said “Ok, what the hell” since we’d never done the studio thing before. He was our guide to achieving what we wanted to do. He knew all the outboard equipment, drum mic’ing schemes, and he made the whole process easier for us because we would have been puttering around wasting money if we tried to do it ourselves. As far as the actual production goes, we went into the studio with demo versions, the basic skeleton of the song laid out. Jarvis would suggest trying synths here and auxiliary percussion there. He listens to a lot of music so he knows what it should sound like. It was really helpful because we were working with bare basic versions of the songs. He’s also just a stellar dude that I would love to hang out with outside of music because I like him a lot. He’s super laidback and doesn’t get too tense in the studio, if we got bogged down he’d be the one to tell us to move on.

NT: With the record out and a tour going on what’s next?

KB: We’ll be on tour until mid-June, and we’re still getting our schedule fleshed out. We’re starting work on our second record already, we’ve started writing and we’re gonna record and mix it ourselves. Hopefully it’s finished before the year is out and we can release it early next year.