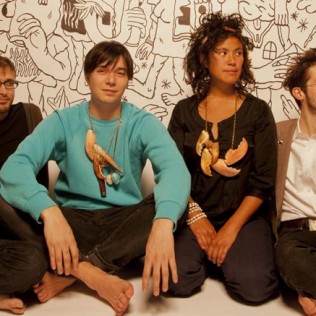 Toronto-based rock outfit Hooded Fang shares a new track from their upcoming album Gravez. The song is entitled “Ode To Subterrania,” check it out above.

Gravez will be released in the US May 28 on UK label Full Time Hobby. Daps Records will release in Canada. Hooded Fang will embark on a full US/Canada tour in late May/June. Full list of tour dates below.

Life on the road will play havoc with your head. If anyone can vouch for that it’s Canadian garage outfit Hooded Fang. Coming over like a spate of incurable sleep paralysis where fantasy and reality meet, the band’s unreal tour bus lifestyle is revealed through ‘Gravez‘ – their equally mind-bending brand new album.

“We’ve been to the moon and back. There were really amazing times and really rough times… like any journey to the moon,” reveals bassist April Aliermo. “We ate crocodile balls, slept on floors and couches, watched TV and movies, and looked out the window in between. All this steady instability must have influenced Gravez.”

“It’s not called Gravez for any real reason but may refer to the impending lurk of death,” reveals singer/producer Dan Lee enigmatically. “Some of it is about instances in life, some of it general imagery, or nonsense.”