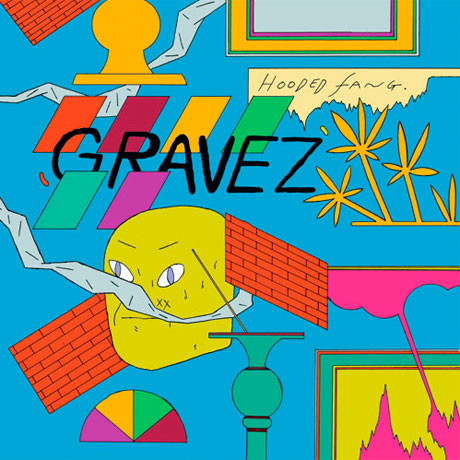 Life on the road will play havoc with your head. If anyone can vouch for that it’s Canadian garage outfit Hooded Fang. Coming over like a spate of incurable sleep paralysis where fantasy and reality meet, the band’s unreal tour bus lifestyle is revealed through ‘Gravez‘ – their upcoming album.

“We’ve been to the moon and back. There were really amazing times and really rough times… like any journey to the moon,” reveals bassist April Aliermo. “We ate crocodile balls, slept on floors and couches, watched TV and movies, and looked out the window in between. All this steady instability must have influenced Gravez.”

“It’s not called Gravez for any real reason but may refer to the impending lurk of death,”reveals singer/producer Dan Lee enigmatically. “Some of it is about instances in life, some of it general imagery, or nonsense.”

If ever a band were to have a Lucy In The Sky With Diamonds moment, this is it. “So many faces and they’re all the same… why you lookin’ at me?” sings Dan in gleeful paranoia on opener ‘Graves’. Elsewhere ‘Ode To Subterrania’ comes over like a West Coast War of the Worlds and baselines reverb like a rubber band through the Tarantino soundtrack style of ‘Sailor Bull’. ‘Wasteland’ tips a hat to The Black Lips if they played 60s tropicalia whilst the bluesy slant of ‘Genes’ recalls a more lethargic The Bees. The sinister ‘Trasher’ sounds like each band member smearing their face in green for their own Halloween Party celebrations – albeit a good 4 months premature. Altogether wrapped up in 30 minutes dead; this is a group who know there’s nothing to be gained for labouring the point.

“This is our first album as this line-up, and the first time that we got together in a studio to record live off the floor… we’ve toured a lot, so we felt comfortable playing together,” they say.

Joining Dan, Hooded Fang is April Aliermo (bass), Lane Halley (guitar), and D.Alex Meeks (drums). That the group even had time to write, let alone record a brand new record is a surprise. Aside from main band duties they continue to play in numerous side-projects, run a label (Daps Records) and work at April’s artist-led playschool, giving kids music lessons as well as putting on a host of all-ages shows. “We have a lot of different projects on the go. Hut, Phedre, Lee Paradise to name a few… it’s one evolving sound that comes out in different ways.”

And yet, ‘Gravez’ is a carrot-shaped beacon dangling on the horizon. “We still have a lot of material, both live-band recorded, and home recorded. They just didn’t fit on this specific record, so we’ll release it later”. Hooded Fang’s wheels are well and truly in motion.