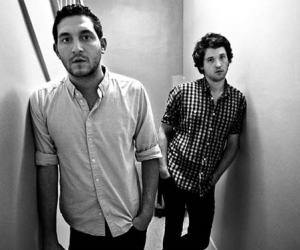 Brooklyn-based duo Holy Ghost! are excited to unveil the track listing and album art for Dynamics, their upcoming sophomore record. Dynamics will be released on September 10th on DFA Records. Dynamics is the follow-up to the group’s self-titled debut album, which was released in 2011 and was hailed as a “classic pop album” by The Los Angeles Times. Check out the track listing for Dynamics below and the album art above The design for the LP was done by longtime DFA collaborator Michael Vadino and features Robert Longo’s “Strong in Love” on the cover.

The band are giving away an outtake from the Dynamics studio sessions, the James Murphy co-produced song “Teenagers In Heat,” which will be available digitally and on 7′ single via DFA, which you can download at the link below:

Holy Ghost! have been mainstays at the spring and summer festival circuit so far, and the band are preparing to hit the road soon for a run of dates with New Order. Check out the full itinerary below.

3. Changing of the Guard

5. It Must Be The Weather