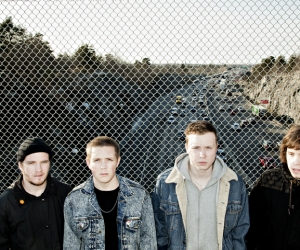 Today Holograms have shared, “Meditations“, the second single from their forthcoming sophomore album Forever , due out September 3rd.

“Mediations” is the follow up to lead single, “Flesh and Bone” , a propulsive, synth-laced track. Launching immediately forward with raucous guitars and a pressing bass-line, “Meditations” continues that vigorous momentum, but with a subtle poise so as not to drop into complete chaos.

A year plus on after the release of their debut LP, Sweden’s Holograms have returned with their second full length, Forever. After a year and a half of touring, losing their jobs, parts of their sanity and returning home only with the hope that their hard work will eventually pay off, they embarked on a new record drawing from the experiences that had simultaneously excited and exhausted the members.

Frontman Andreas Lagerström (vocals/bass) and Anton Strandberg (drums) still live in working class Farsta, 5 miles (8 kilometers) south of urbane and metropolitan Stockholm while the brothers’ Spetze (Anton: vocals/guitar, Filip: synth) still live at home. This isolation and boredom after their first international tours led the group to further mature and grow their sound into a record far more cohesive and “big-sounding” than their debut. The band aimed to capture the feeling of music being played in a church or temple, “like a mass…procession, or eulogy” as clearly demonstrated on closing track “Lay Us Down.” Though matured and experienced, the band’s youthful energy and DIY/Punk upbringing is still upfront and in full effect with the caustic “A Sacred State,” the melodic attack of “Rush,” or the unbridled mass-of-energy-cut-loose of “A Blaze on the Hillside.” Clearly, Holograms show no signs of slowing down the excitement and aggression of their original sound, something to delight their growing audience in this current world of arrogant sonic about-faces on sophomore albums.