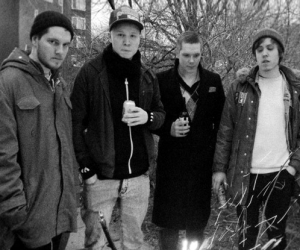 This week Holograms celebrate the release of their sophomore album Forever. Along with Forever’s release, the foursome have also premiered a video for “Meditations” – their anthemic second single from the album. Filmed by Emanuella Zachariou (who also directed and edited) using a 16 mm box camera, the video’s hazy sepia tones and unhurried cloaked figures create a perfect contrast to the track’s throbbing energy.

Frontman Andreas Lagerström (vocals/bass) and Anton Strandberg (drums) still live in working class Farsta, 5 miles (8 kilometers) south of urbane and metropolitan Stockholm while the brothers’ Spetze (Anton: vocals/guitar, Filip: synth) still live at home. This isolation and boredom after their first international tours led the group to further mature and grow their sound into a record far more cohesive and “big-sounding” than their debut. The band aimed to capture the feeling of music being played in a church or temple, “like a mass…procession, or eulogy” as clearly demonstrated on closing track “Lay Us Down.” Though matured and experienced, the band’s youthful energy and DIY/Punk upbringing is still upfront and in full effect with the caustic “A Sacred State,” the melodic attack of “Rush,” or the unbridled mass-of-energy-cut-loose of “A Blaze on the Hillside.” Clearly, Holograms show no signs of slowing down the excitement and aggression of their original sound, something to delight their growing audience in this current world of arrogant sonic about-faces on sophomore albums.

Lastly, they are excited to announce that starting in October they will embark on a nearly three month tour. October and November will be spent touring Europe and come December they’ll head stateside. Kicking off in DC, where they will be joined by TV Ghost, they’ll play two weeks of almost nonstop dates across North America. See all dates below.