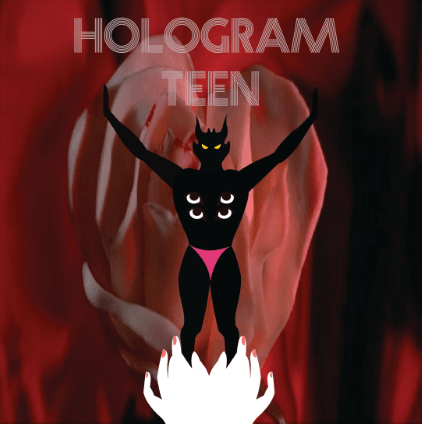 Hologram Teen (Morgane Lhote, formerly of Stereolab) has announced that she will be releasing a 2-track single on 7″ vinyl in early November via London’s Deep Distance label. This is the solo electronic music project of Morgane Lhote, whose music can be described as ‘motorik disco’. This project was born in 2012 after a lengthy and colourful career in numerous other bands, including seminal band Stereolab.

Originally from Paris, Morgane Lhote moved to London when she was 20 and spent 12 years there. Then she moved to NYC and, nine years later, moved to Los Angeles. She played keyboards in Stereolab from 1995 to 2001, then in The Projects from 2002 to 2004. From 2005, she played in Garden and with members of Simian Mobile Disco / Simian, until finally starting this current project Hologram Teen. She was with Stereolab for their legendary albums ‘Dots and Loops’ and “Emperor Tomato Ketchup’, among other releases.

“After spending most of my music career playing keyboards in bands, I fell in love with Ableton Live 3 years ago and felt ready to write my own material. It’s been so fun and I love spending hours looking for and manipulating obscure and not so obscure samples beyond recognition. With Hologram Teen, I’m trying to put together genres as disparate as Prog-rock, horror movies soundtracks, Hip-hop, Disco, Dub, Dance, and variété française songs together in a fun and mischievous way.” She explains.

Her new material does not directly resemble her former band Stereolab, but does have the stop/start choppyness / jazzyness of mid to late Stereolab, which is what makes this music distinct from straight Electronica. There is clearly a lot of 70s influence, as well as 90s house, but seems to have completely bypassed the 80s.

“My music is pretty eclectic (always electronic though). I wanna make electronic dance music that’s playful and groovy (mostly influenced by disco and Italian horror soundtracks) with loads of diverse and imaginative samples,” explains Morgane Lhote. “This is a soundtrack to a movie where John Carpenter and Boris Karloff hang out at Studio 54 with German zombies dancing to Thriller in the background”.

The 2-track single is coming out in November on a small London label called Deep Distance, the sister imprint of Great Pop Supplement. The first of these is more focused on releases in the kosmische / kraut / synth genres. Both labels are lovingly run from the corner of a crouch-end kitchen and can proudly boast sold out back catalogues of stubbornly vinyl only releases.

Both tracks were written by Morgane Lhote and produced by Richard Bennett. ‘Post-Apocalypteacakes’ was mixed by Robert Fullum and mastered by Adam Gonsalves at Telegraph. ‘Tracksuit Minataur’ was also mixed by Rich Bennett, and mastered by Justin Colletti, artwork by Alex Smith.