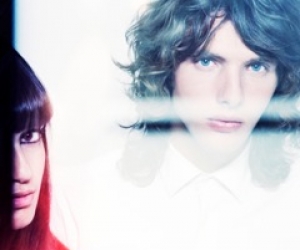 Hologram – Maxime Sokolinski, French-born singer, songwriter and musician, and French singer Clara Luciani – have released a brand new video for ‘I’ve Got Eyes’, from their debut EP Absolute Zero on 22 July 2013 and announced two London summer dates – at the Lexington on 5 August and at Birthdays on August 6.

Recently signed to Mute Management, the duo, who are currently working on their new album, met in Paris in the winter of 2012 and, after an inspired evening that resulted in their first song ‘I’ve Got Eyes’, Sokolinski made the decision to move to Paris from LA so that the pair could dedicate themselves to what is now known as Hologram.

With influences spanning early Pink Floyd and Spiritualized through to Baudelaire and Chagall, Hologram write music that seeks to inspire dreamlike states. Clara Luciani featured on the first album by critically acclaimed French band La Femme, as well as touring with them throughout Europe. She has also recorded for Marie Madeleine & Manchester’s Great Waves.
Maxime Sokolinski recently composed for Mathieu Chedid’s album ‘Il’ & has performed with artists such as Daniel Johnston & Adanowsky, along with touring as a multi-instrumentalist for his sister, the well-known French singer and actress Soko.
The 4 track self-released EP, Absolute Zero, was recorded & produced by Maxime Sokolinski at his home in Paris, watch the video for lead track ‘Absolute Zero’ here:
http://www.youtube.com/watch?v=2mS2JAthusA&feature=youtu.be
LONDON LIVE DATES
5 AUG, Lexington – stagetime 8pm – with Generationals
6 AUG, Birthdays – with Us Baby Bear Bones