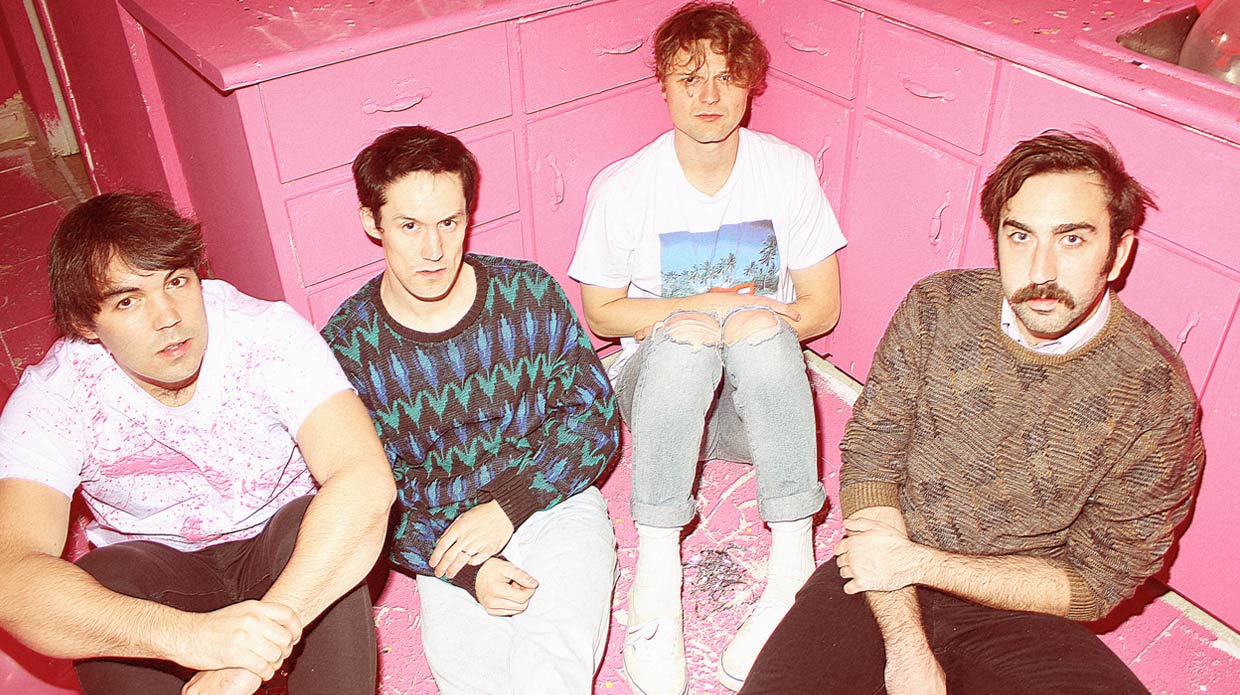 As much as we all love drama, it’s heartwarming to see a band like Hollerado end for no other reason than wanting to do so. With their upcoming album Retaliation Vacation, Hollerado are doing one last tour and moving on. After more than a decade from their start in Manotick (Ottawa Region), the band’s leaving behind a legacy of solid albums, weird concepts and Royal Mountain Records. We spoke to Hollerado’s Menno Versteeg to catch up about the band’s final tour, a final record and how the band led them to their new careers. Editors Note: Given the context of the interview we’ve also included songs from across their career to reflect on the different phases of their music.

Northern Transmissions: You guys have been playing together so long, so what finally made you guys decide it was time to wrap up Hollerado?

Menno Versteeg: It’s a pretty simple answer, the time has come and it just feels right. I challenge you to name a band where your favourite album of theirs is their seventh one.

NT: It’s true, there’s very few bands that have that Fleetwood Mac moment where their big hits come around album 10, 11, 12 etc, but they’re a rare case!

MV: And it’s not even really about that, because we’ve been throwing that line around as a joke. The band has just run its course really. We’re still best friends, but it felt like the right thing for us to do now. It’s funny, we announced our last show and it sold out in an hour, so we announced more. People asked if we were second-guessing ourselves, especially our friends after reading the news and good stories about us getting people through times in their lives. Rather than second-guessing ourselves it’s done the opposite, it’s made me want to go out with that, instead of ruining it. There’s nothing juicy inspiring the breakup. I wish I could say someone invented an app that delivered nachos in bed, and that they’re a millionaire, and we don’t want to do the band because of that. It’s just us internally dealing with all this other stuff in our lives and the band running its course.

NT: Moving back to the record, what was the big driving force this time around and how has it felt noting it as your final Hollerado release?

MV: That feeling is in the record lyrically for sure. The themes are very much around things coming to an end, I mean the first single is called “One Last Time.” There’s other songs there about just appreciating the moment and what you have while it’s happening. Then it’s also about just not giving a fuck, we’re stopping, so let’s just write the songs we want and make them sound how we want. If people don’t like it, that’s fine, we’re retiring. Making a record for just us is great.

NT: Was there anything you’ve done this time that you may have avoided in the past for wanting to wait?

MV: There’s a lot of that actually. There’s a song on the record that started off as a real rocker, but we stripped it down to voice and bass. We’ve never really put out a song like that outside of the 111 Songs album, but this is more of a serious release so it felt good. There wasn’t much that we felt we had left to do though, we did what we set out to do. We really just wrote some tunes, and had a good time. Now it’s time for the next thing!

NT: Is there anything outside of Royal Mountain you have planned after your last show? And on that note, do you have larger plans for Royal Mountain?

MV: Royal Mountain has really become a business, which is funny to say. I enjoy that hat though, and bringing the perspective of someone who’s toured in bands for years to the label side. I can look at decisions and ask myself how I’d wanted to be treated as an artist. I have no intention of folding that, especially with all the staff and bands involved. It’s been so great, so I want to continue doing that. As for the other guys, they all have something going on. Jake (Boyd) has a bunch of cool bands, plus there’s always a need for a great drummer. Nick (Nixon Boyd) has been producing bands which is super cool, his work with Dizzy is getting a lot of traction and got a Juno nomination. Music has lead us to all these things. We got involved with Collective Arts Brewery over the years because they’re very supportive of the arts, and we worked on collaborations with them. Dean has weaseled his way in there, and has moved up the ranks as one of the go-to guys at the company. It’s cool to see everything we’re doing now as continuations of routes that Hollerado set us on.

NT: Moving from Ottawa to Toronto, what was the biggest shift you saw in the music scenes and your careers?

MV: Well we actually spent time in Montreal in-between too, which is really a great city to be broke in while in a band. In Toronto, we’re getting so many opportunities that I don’t think we would’ve gotten in another city. There’s not really an infrastructure around the music industry outside of a band. But in Toronto we can do all the work I’ve been talking about. It’s definitely about a lot of extra hustle, that’s for sure. I don’t mean it in a good way necessarily, but it forces you to really perform at a certain level.

NT: Is there anything fans can expect from the final Holleardo shows at the Danforth Music Hall in December, and will we see anything similar on the road before that?

MV: There’s 100% going to be a date in Ottawa…maybe two. All the last tour, we’re not doing this and immediately retiring. We’re not doing this final tour to make a bunch of money, and we never really have to be honest…maybe to our detriment. We’ve always put fun before money. This tour we plan to really put fun before money, putting all our friends bands that we’ve toured with over the years. We want to put our favourite crew people out too and if we have a stupid idea that we’ve always wanted to do, we’re going to do. In true Hollerado fashion, it may be a triumphant failure, but that’s part of the fun.