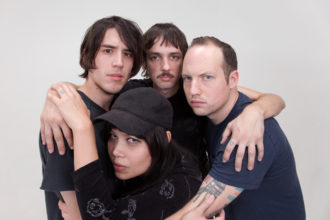 Indie supergroup Hit Bargain, recently shared details of their debut LP, Potential Maximizer. Today, they are psyched to drop the new Jack Sweeney directed video for album track “Capitulate”. The full-length will be released on May 11th via Buzz Records (Weaves, Dilly Dally, Greys). Comprised of members of The Pains of Being Pure at Heart, Cold Beat, North Highlands and Beach Fossils, the band have been trafficking in a confrontational style of hardcore influenced post-punk for a little under 2 years, and the album is the follow up to their 2016 self-titled EP. The album was recorded over a three day period when she returned to the West Coast, with Mark Rains (Death Valley Girls, E-40) at Station House Studio in Echo Park, while Singh was 6 months pregnant with her first child.

Nora Singh on the video:

Named for a now shuttered Echo Park 99 cent store, Hit Bargain was formed after Singh was introduced to Hochheim and Barron by a mutual friend. They quickly found notoriety in LA as a result of their unique style of performance – an intense and physical blend of hardcore and performance art, in part inspired by the mid-century European avant garde Situationist art movement, and perhaps best encapsulated by a series of shows during which Singh performed standing on the head and torso of a half-naked trampling fetishist.

Formed in the disorienting, dehydrated in-between spaces of Los Angeles, Hit Bargain are an art punk outfit determined to create new shapes from the building blocks of a well-worn genre. Comprised of Nora Singh (vocals) Mike Barron (guitar and vocals), Anton Hochheim (drums), and Sean Monaghan (bass), current and former members of The Pains of Being Pure at Heart, Cold Beat, North Highlands, These Are Powers and Beach Fossils, the band apply their considerable pedigree to crafting a sound that is at once inventive, cerebral and rawly engaging. Ahead of the album’s release Hit Bargain have shared the track “Capitulate.”