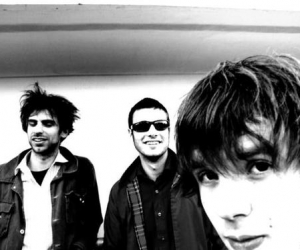 Italian band His Electro Blue Voice will release Ruthless Sperm, their Sub Pop debut, August 19th in Europe and August 20th in North America on CD, LP and digital. The self-produced album is the band’s first full-length release, and it features seven tracks, including the lead single “Sea Bug”. You can watch the Ruthless Sperm album trailer here.

You may be familiar with His Electro Blue Voice from their EPs & singles on various indie labels (SS Records, Sacred Bones, Bat Shit, Brave Mysteries) and, more recently, the song “Kidult”, their contribution to the Sub Pop 1000 compilation released earlier this year (read more about SP 1000 here). The Quietus says of “Kidult”: “[Sub Pop 1000] could hardly kick off with a better statement of intent than the stormy and chaotic stop-start post-punk of “Kidult” from Italy’s His Electro Blue Voice, the song burning out triumphantly amid reverb-laden piano stabs and guitar feedback after seven minutes.

After a short stack of collectable singles and some hard to find import EPs, this Italio-trio with the long name unleashes their debut long-player on the Sub Pop imprint. Thirty-plus minutes of shock-horror blasts, blaring cyber-synth attacks and that gloriously repetitive Stoogeoid-meets-Killing Joke throb. His Electro Blue Voice has pulled back on the reigns, controlling the demons that reside in their improvisational pits of personal hell. The end result is a platter that’s as direct as it is deadly. Still chock full of uncharted ugliness; only now the loose ends have been cattle-prodded into submission, wrapping things up with just a few scrapes and bruises so we can continue down the next rabbit hole. Yet for all the bombast and bummer, His Electro Blue Voice still bring forth euphoric hooks and some shards of shoegaze, if only to leave them strewn about within the mechanical wreckage. You can almost hear the early sounds of the 4AD roster in the grooves, had they been captured to track by composer Fabio Frizzi and left teetering between warped indie sensibility and creepy-crawl madness.