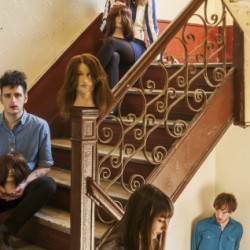 His Clancyness shares a new video for “Zenith Diamond” featuring front man, Jonathan Clancy, in a hazy whirlwind of smoke and mirrors, guitars, synths, drums and denim-clad guys and girls. Directed by Pietro Borzí and Giulia Mazza (of His Clancyness) the video compliments the free spirited rock and roll attitude that Clancy and the track itself convey. “Zenith Diamond” is the first single from Clancy’s much anticipated release Vicious out October 8th via FatCat Records.

Vicious will be released by FatCat on October 8. A full US / UK / EU tour is being planned for the Fall/Winter. On the road His Clancyness becomes a full band with friends Giulia Mazza (synths / keyboards / noise boxes / vocals / percussion), Emanuela Drei (bass, sampler, vocals) and Jacopo Borazzo (drums / percussion). Having embarked on high profile tours with Deerhunter and Widowspeak this year, they are a well-oiled and invigorating live act.