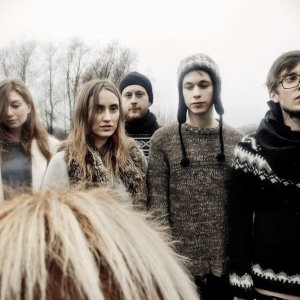 It’s been six months since Norwegian quintet Highasakite released their debut EP on Propeller Recordings. Since then, recording in-between tours and numerous summer festivals, the band has readied the release of their full-length debut, Silent Treatment, due out on March 4th in the US. First single, ‘Since Last Wednesday,’ is out now, and the new video, directed by Yngvild Sve Flikke, is now available for viewing.

While the band’s earlier songs were inspired by childhood and nostalgia, the theme of the new album focuses on the undercurrent that’s going on behind closed doors; the silent battles at home, and the longing to get away. It introduces a darker side to Ingrid Helene Håvik´s lyrics, but fans of her surrealistic, and often innovative views of the world won’t have to worry – it’s all there.

The last year has seen Highasakite travel around the western hemisphere. After having toured Europe and the US, visiting Berlin Music Week, Iceland Airwaves, Eurosonic, The Great Escape, Tallinn Music Week, Reeperbahn Festival, Roskilde, SPOT festival and many more, the band are now ready to take on new challenges.