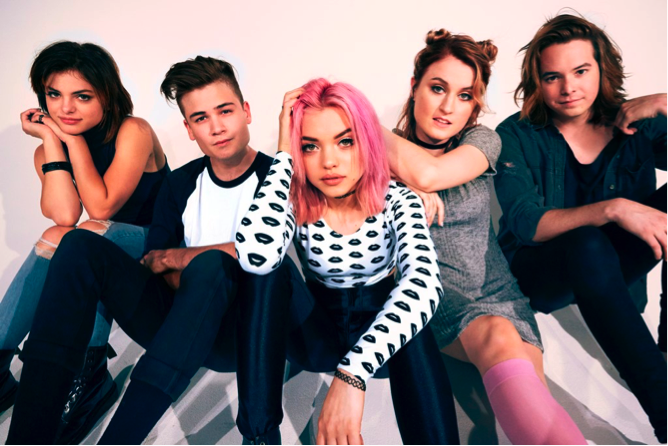 Alt-pop band Hey Violet debut the video for their latest single, “Break My Heart,” today on Vevo. The high school-set video was shot in Los Angeles and directed by Jesse Heath and Darren Craig for The Uprising Creative.

“We wanted the video to feel like the ultimate high school heartbreak,” says front woman Rena Lovelis. The story is told through the moody color palette and crazy visual edits which represent the intense range of emotions you go through during a break up and shows how quickly your feelings can change moment to moment.”

Released last month, “Break My Heart” was included on Spotify’s New Music Friday Playlist and has racked up over two million streams. Noting that Hey Violet “already landed a well-deserved hit with ‘Guys My Age,'” Idolator says, “Break My Heart” is a “monstrous electro-anthem” and declares, the band is “destined to have a massive year.” Alternative Press calls the track “irresistible,” while Nylon raves: “Hey Violet knows how to write a good pop hook and ‘Break My Heart’ is a testament to that. This song has spunk.”

“Break My Heart” is the follow-up to Hey Violet’s smash single “Guys My Age,” which has more than 20 million combined streams, while the video has over 11 million views. “Guys My Age” was named one of the Best Songs of 2016 by The New York Times, who called it “teen-pop’s revenge: an urgent dark song about sexual rebellion” and one of the 20 Best Songs of 2016 by V Magazine. Hey Violet was dubbed an Artist Primed For A Breakout in 2017 by Billboard, and a 2017 Artist To Watch by The Guardian, PopCrush, and more.

The band, who recently wrapped up a sold out North American headline tour, was also featured on the March cover of Alternative Press. Hey Violet, which is front woman Rena Lovelis, her sister Nia Lovelis (drums), Miranda Miller (keys, vocals), Casey Moreta (lead guitar) and Iain Shipp (bass) will release their debut album in June 2017 on Hi or Hey Records/Caroline.