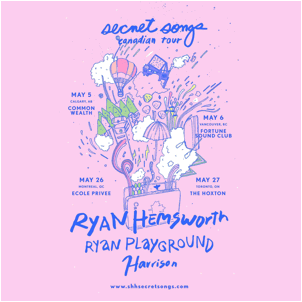 After sharing his first new song of the year with “It’s Okay, I Promise”, Toronto producer Harrison is back with a new offering in collaboration with Ryan Hemsworth. The two like-minded producers got together for the latest release on Ryan’s tastemaker label, Secret Songs. The release of their track, “Vanilla”, continues the Secret Songs tradition of “free downloads, friends only, bi-weekly” as SHH 043.

Ryan and Harrison will link up next month alongside fellow Secret Songs alumni RYAN Playground on the recently announced Secret Songs Canadian Tour. The tour will make stops in Calgary, Vancouver, Montreal, and Toronto in May.