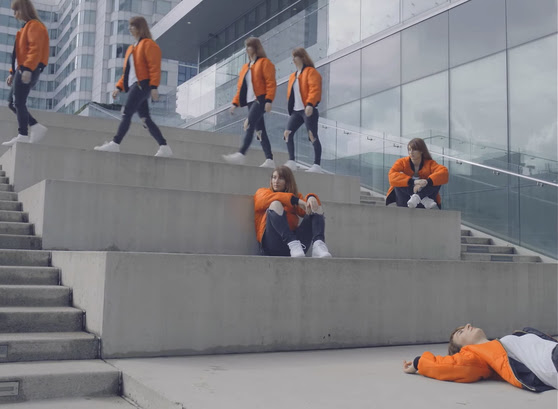 Hannah Georgas is sharing the video for her new single “Evelyn”, the latest single from her latest release For Evelyn, produced by Holy Fuck’s Graham Walsh. Directed by Sammy Rawal (The New Pornographers, Metric). For Evelyn is now out via Dine Alone Records.

Speaking about the treatment – filmed at Toronto’s TIFF Lightbox, home to the Toronto International Film Festival – Rawal says; “I kept envisioning that specific rooftop location of the TIFF Lightbox in my head. I loved how graphic and unconventional it was…perched up on top of the city. I knew it would be a perfect visual balance for the type of performance video I imagined. It’s minimal design and neutral grey colour would offset the beat-driven edit, dance sequences, and Hannah’s wardrobe perfectly. I really wanted to play with pattern, repetition, looping, and scale with this video. For me, it almost feels like this army of Hannah clones assembling high above the city in the clouds, and marching confidently forward across an urban landscape.”

Named after Hannah’s 98-year-old grandmother, For Evelyn was produced just outside of Toronto by Graham Walsh (Holy Fuck), mixed by Nicolas Vernhes (The War on Drugs, Animal Collective, Dirty Projectors, etc) and features collaborations with Ryan Guldemond (Mother Mother) and Andy Shauf. Walsh was also at the helm for Hannah’s self-titled release in 2013.