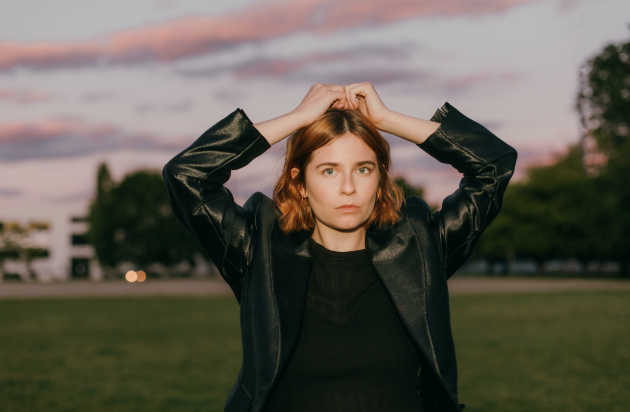 One of the many struggles for artists today is trying to find a way to connect with their audience online. The internet is over saturated with live streams, blogs and vlogs, not too mention Twitter, Facebook and Instagram posts from musicians trying to establish a sincere connection to their fans. Haley Blais is one of the artists that has found her community online seemingly by accident. The charming singer/songwriter and musician started her current Youtube channel, “out of boredom” and it has grown to an impressive 180,000 subscribers and counting. Blais began her career in an admirable DIY fashion. Writing and recording songs in her bedroom on her ukulele and uploading videos of these songs and assorted lifestyle tidbits to a suddenly ever expanding fanbase. In 2018, Blais collected some of these songs for her debut self released EP Let Yourself Go which went on to solidify her as not only a super talented artist but also one with a unique voice and self assuredness. Listening to the songs on that release show a young woman and artist with a self deprecating charm and endearing relatability. Blais’s new debut full length Below The Salt, set for release on August 25th via Tiny Kingdom Records, finds her with an increased confidence as a performer and songwriter but without sacrificing any of the inherent charisma she’s come to be known for. A quick glance at her Youtube channel sees music videos interspersed with vlogs about her recent move and a quarantine haircut. None of it feels forced, just the inner monologuing of a person sharing real thoughts and emotion in a very genuine way.

When we catch up with Blais on the phone from her home in Vancouver, she explains how her online persona came to be and how that has informed her new record. “The Youtube channel I have now kind of stemmed out of boredom. I had an old one that I would use to post covers and stuff like that but I decided to start this one to be an idiot on,” she explains with a laugh. “I wanted to make this current one like my weird little lifestyle and music platform.” As time passed and more and more people began following Blais online, she decided to pivot a bit and start to use it in a more serious fashion, while keeping an eye to the fact that she is sharing a lot of her personal life with strangers. “In the last little while I have definitely started using it more sparsely and taking music more seriously. I think people see me being very authentic and genuine on there and, for me, I kind of needed to find that line where I’m not showing too much about my life. I’m inadvertently projecting a character though, while it is personal, it’s important for me to feel that I am not being completely vulnerable.” While Blais may use humour as a way of building a bit of a separation between her personal and online lives, on her new record she displays an openness that is extremely refreshing. Below The Salt is an immaculately produced album courtesy of Alaina Moore and Patrick Riley of indie rock faves Tennis and Vancouver based producer and solo artist Louise Burns. Taking it’s cues from the vanguard of 1970s pop and folk singers such as Carole Kane and The Carpenters, the album is a delicately powerful journey into one woman’s inner thoughts, hopes and fears. In comparison with her last batch of released material it’s a much grander affair. Replacing her old standby ukulele with rolling drums and airy synths, Below The Salt marks Blais’s debut coming out party with an gravitas that many records, debut or otherwise, would kill to have.

“In my head I metaphorically smashed my ukulele,” Blais chuckles. “It really was this inevitable switch though from the bedroom stuff to working in a studio with all these people. I am obviously a huge fan of Tennis and having Alaina and Patrick come onboard was a dream and then meeting and connecting in a big way with Louise was amazing. There were these two sides to it. I was initially starstruck with Tennis and so amazingly comfortable with Louise. It was my first time collaborating with external forces, outside of my bandmates and having people critically looking at your songs. Taking things out and changing things. In the past with my band, we would add parts but my song would relatively stay the same. This time was the first time I felt like I had to let go of a little creative freedom but it was such a great experience and even though I was working with two different sets of producers, this consistency remained to the songs and looking back at it, each team brought something unique to the songs. Tennis brought a light and Louise brought a darkness and it turned out to be a really nice balance.” It also helped that both sets of producers completely understood the touchstones that Blais was reaching for on the record. “Carole King, Carole QUEEN,” Blais says excitedly with a laugh. “Love her. Alaina was asking me what I wanted to emulate on the record and it was these 70s singer songwriters. ‘What Would Carole Do?’ became a bit of a mantra while we were recording.” When asked about what draws her to this type of music, Blais explains, “There’s a rawness to it and genuine thought in the lyrics. I’m a creature of these old eras, I find something very magical about it.”

That magic was definitely captured on Below The Salt and now with the record wrapped and awaiting release Blais finds herself in the same situation that everyone on the globe is with not being really able to leave the city you are in because of Covid 19 concerns. “I was supposed to be on tour with Peach Pit, which is something that has gotten moved to next year but now I’ve been taking this time to write songs and exercising a newfound patience with my songwriting so there are definitely silver linings to all of this. I’ve been trying to just enjoy the time off for now, it’s what made my move so stress free but there is a bittersweet element to all of it for sure.” Whatever comes out of Blais’s downtime is something that, after experiencing the joys of Below The Salt, should be exciting to hear. The depth of emotion and character featured through the entirety of the record shows what a unique and wonderful songwriter Blais already is and with her wanting to become even more patient with herself and her work only shows that she is consistently looking to be as genuine to herself as well as her art. “For me to be as genuine as possible on this record was a lot easier that I thought,” she says candidly. “I’m worried that it will be more difficult the next time around but I’m making it an intention. There’s going to be a lot of trial and error but like with my Youtube channel, I was able to find my place there and hopefully with the record the same can be said about my place in the music industry.”