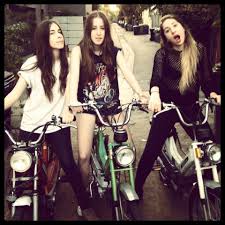 The Prize, awarded in three categories, was developed in honor of Creative Director Brent Grulke, who passed away on August 13, 2012. Brent’s love of music and the spirit of the festival is reflected in the three Prize categories: Developing US Act, Developing Non-US Act and Career Act.

The Developing Act Prize is for artists who are breaking new ground with their creativity and show the most promise in achieving their career goals. This years winners were Haim, a quartet, consisting of three sisters and a mister who hail from the San Fernando Valley. Haim performed at this year’s festival and garnered favorable press in anticipation of their debut album, coming this year.

The Grulke Prize winner for Non-US Act is CHVRCHES. This band from Glasgow, Scotland made their US and SXSW debut this year. Formed in 2011, they were on the list for this year’s BBC’s Sound of 2013. Their catchy synthpop sound and alluring (and highly educated) vocalist, Lauren Mayberry, made them one of the bands to see at this year’s festival.

The Grulke Prize winner for Career Act is the Flaming Lips. The Flaming Lips and their storied career have a long intersecting path with SXSW. They debuted a their new album, The Terror, in its entirety along with a new stage production. The band played an intimate show at The Belmont and a packed to the ends of Auditorium Shores outdoor stage concert. Wayne Coyne and the band are masters of reinvention whose beginnings, in Oklahoma City, date back to 1983.

Brent Grulke had a lengthy career in many aspects of the music industry from music editor at the Austin Chronicle to sound engineer or tour manager for many Austin bands as well as production and sound engineer in clubs in San Francisco. He later moved to Los Angeles to become the manager at Spindletop Records which eventually led him back to Austin where he was the longtime Creative Director of the SXSW Music Festival. Jurors for the Grulke Prize included music critics, industry professionals and SXSW staff who knew and worked with Brent over the years.