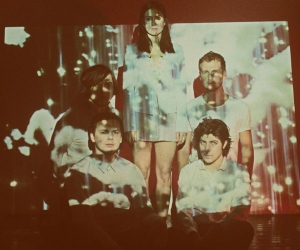 Today, HAERTS announce the release of their Hemiplegia EP to come out on 10/8 via Columbia Records. HAERTS partnered with Spotify to premiere the EP a week early on  HERE. The band just finished up their tour with Washed Out, and will play the Neon Gold Records Showcase and a KEXP Live Session at CMJ Festival next month.

About the EP artwork, the band says: “The cover art is based on two images that have been meaningful to us and capture the title, sound and feel of “Hemiplegia”.  Gerhard Richter’s Cloud is the first image we used as band and has always remained significant. In our search for an image for “Hemiplegia,” we drew from another of Richter’s most haunting works from the 70s, titled I.G.. His treatment of the body, impossibly and eternally suspended in a moment, emotes the sense of paralysis found in the track “Hemiplegia.” This is why we chose to interpret I.G. with a photograph of Nini set against the cloud”.

HAERTS is a band based in New York hailing from Germany, England, and the United States. The group consists of Nini Fabi, Ben Gebert, Garrett Ienner, Derek McWilliams, and Jonathan Schmidt. The EP was produced in collaboration with Jean-Philip Grobler (aka St. Lucia). Late last year, the band revealed their first song “Wings” . In April, they collaborated with Emily Kai Bock for the gorgeous official “Wings” video.

The band has shared their upcoming album live on tours with Shout Out Louds, Atlas Genius, Fitz And The Tantrums and Washed Out. HAERTS’ debut album is due in 2014.