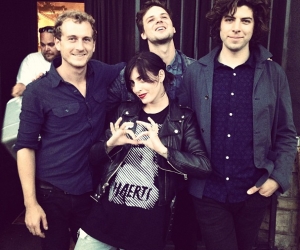 HAERTS will release their debut EP, Hemiplegia, on September 17 via Columbia Records. The collection, produced by friend and label mate Jean-Philip Grobler of St. Lucia, features tracks “Wings” and “All The Days” in addition to brand new songs “All For You” and the EP’s title track.

As teenagers, singer and songwriter Nini Fabi met multi-instrumentalist and songwriter Ben Gebert in Munich, Germany, where they both grew up. After years of performing together, the two moved to Brooklyn, where they met Jean-Philip Grobler (aka St. Lucia) who became the producer of the project.  He also introduced Fabi and Gebert to guitarist Garrett Ienner, who eventually became the third founding member of HEARTS.  Inspired by new wave and classic eighties pop, they developed the band’s cinematic and atmospheric soundscapes. Shortly after, bassist Derek McWilliams and drummer Jonathan Schmidt joined to fill out the band.

HAERTS will soon join Washed Out on tour, with dates kicking off September 2 in Victoria, BC and continuing through the month. The band will also perform as part of Gorilla vs. Bear’s summer party GvsB III at Dallas’ Granada Theater on August 23 (see below for full itinerary). HAERTS has recently toured with Shout Out Louds, Atlas Genius and Fitz And The Tantrums.

Hemiplegia track listing:
1. Hemiplegia
2. Wings
3. All For You
4. All The Days