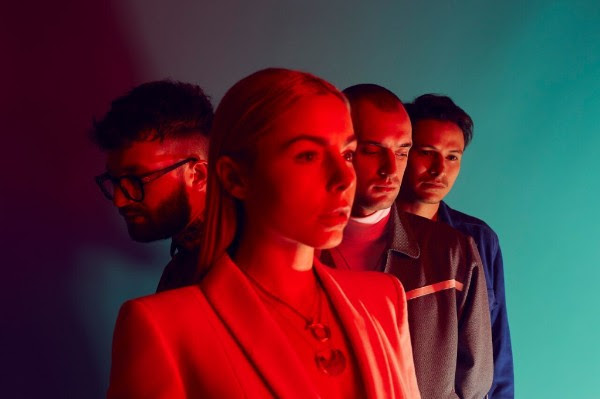 Uk band, HÆLOS have returned, this time as a four-piece, along with a new single, “Buried In The Sand,” and an accompanying video by directors The Sacred Egg. The initial HÆLOS trio comprised of Lotti Benardout, Arthur Delaney, and Dom Goldsmith has expanded with the addition of Daniel Vildósola, now a full time member after being part of the HÆLOS touring band. Two-plus years since the release of their debut album, Full Circle (Matador), “Buried In The Sand” is the first taste of more new music to come via Infectious in 2019. The accompanying video was shot on 16mm film in Kiev.

HÆLOS on “Buried In The Sand”

“When we came back to work on the music that would become our new album we decided to explore different ways of writing to challenge and push ourselves in a new direction. We set about trying to write one song an hour for a week and “Buried In The Sand” came from one of those jams. Dom working a beat and bass line from his modular set up and Daniel, Lotti and Arthur jamming licks and vocals over the top. Our passion for throwing together odd genres meant we all dove deep into our record collections for inspiration which lead us to interesting places like the bluesy undertones in Arthur’s vocal. Daniel, who toured with us from the beginning, was really involved in the writing and has joined us as a full member of HÆLOS. His musicality is all over this track.

The song title was an accident and came serendipitously from the phonetics of the melody, but the rest of the lyrics were born from a strange dinner party where everyone ended up Snapchatting each other and no one was talking face to face. It perfectly summed up how jarring and unnatural our disappearance into a digital world could be. Lotti’s verses sound almost like a poem a computer would write if requested — a synthetic perfection that holds a certain tension against the emotion of the music.”

HÆLOS will tour North America in March and April. Tickets go on sale 10am local time on Friday, October 26th.