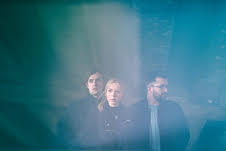 London trio HÆLOS have announced details of their debut EP Earth Not Above. The album is set to be released on June 2nd via Matador Records. To celebrate, the band has shared a free download of their cover of The Beloved’s classic “The Sun Rising.”

The EP features the title track along with 3 brand new songs “Cloud Nine”, “Breathe” and “Ethyr.” Calling to mind the same deserted dawn high streets stalked by the music of Massive Attack, Portishead and other electronic artists who spent the 90’s finding the pain after the rave, each HÆLOS track sounds like a ritual; a way to cope. In a world that has forgotten about the chillout room, those rituals and coping strategies are more vital than ever.

Earth Not Above is the band’s first official release on Matador Records – after sharing the debut track “Dust” last year.

HÆLOS will play a show at XOYO next week, after selling out Oslo in March. Before that. The band will also play the Great Escape where they will play two shows over the coming weekend. The rest of the summer will see the trio take on the festival circuit with key slots already confirmed at Field Day, Festival No. 6 and Latitude as well as support slots with TV on The Radio.

Earth Not Above EP tracklisting